Once a week I host a writer who uses music as part of their creative process – perhaps to tap into a character, populate a mysterious place, or explore the depths in a pivotal moment. This week’s post is by bestselling romantic novelist Fiona Walker @fionawalkeruk

If I know I’m not going to be overheard, I sing – in the bath, on long dog walks, and when writing, or more realistically the thinking pauses between writing. This habitual distraction is also creative inspiration. It’s no coincidence that characters sing in many of my books, from my first novel French Relations in which dinner party guests gather around a piano to perform Eric Clapton’s Wonderful Tonight, to my twelfth novel The Love Letter, where my heroine inadvertently finds herself duetting an old Bo Diddley number with her ex boyfriend in the local pub. That song, You Can’t Judge A Book By Its Cover, is a joyful riot of old-time rhythm and blues that also feeds into the themes of a novel in which characters are not as they first appear, most especially a reclusive writer who hides his identity behind a pen name.

As a romantic novelist with a reputation for raunchy romps, I appreciate Bo Diddley is a far cry from a power ballad, but I once bought The Greatest Love Songs In The World…Ever to listen to when writing passionate scenes – much to my husband’s hilarity – and it was the most awful backing track from which to seek inspiration, like writing on the dance-floor at an over-40s singles night. Most of the music I listen to when I write is white noise, and if I’m on a roll I don’t notice it at all, until that one song sticks, and that’s when inspiration strikes.

When a song connects with a book’s plot, I often play it – and sing it – day and night, and it occasionally even gets woven into the text. This means that I have to be very careful what I listen to when writing. It once cost me almost as much as a new car to gain permission to quote six lines of a Jim Steinman track that I couldn’t get out of my head, after which I not only stopped featuring heroines who were Meatloaf fans, but also monitored my listening habits and now tailor them to each book. I keep a limited number of CDs ripped to my computer, so if I’m not listening to the radio, I’m going through the same albums on a loop, many of them instrumental. The energetic Brazilian guitarist/percussion combo Rodrigo y Gabriela fuelled the first draft of The Love Letter; the sultry Gotan Project added tempo; saxophonist Jan Garbarek injected cool, and I played endless Mozart for jollity and Bach for comfort.

When the rough plot of The Love Letter was in place, that tailor-made compilation changed to vintage Kate Bush, Stravinsky’s Firebird Suite, Bjork and Birdy, all inspiring the book’s larger than life characters, comic melodrama and coastal setting, as well as a very long, flirty seduction in a fairytale tower. Yet it was when googling something entirely unconnected that I found the Bo Diddley song that fitted the story so well that I couldn’t stop playing it. 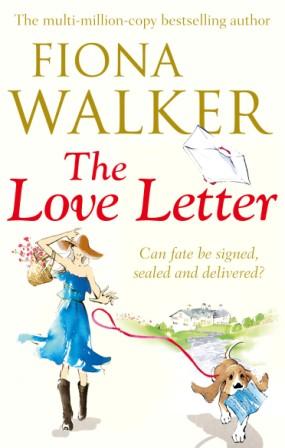 If I hit upon a theme-tune for a plot or its characters, I know I have a secret entrance into the book, and although the album or song itself may never appear on the page, you can guarantee I’ve listened to it hundreds of times when writing certain scenes. One of my novels was written whilst listening to Damien Rice almost non-stop, another to Alison Krauss – and when a romantic hero who always made me think of Christy Moore’s Ride On featured in a sequel 10 years after his first appearance, I only had to listen to the song to find him coming to life again.  Although many of these songs get honourable mentions in the books, only the very special few are performed by me and my characters; You Can’t Judge A Book By Its Cover is still being sung loudly in Worcestershire.

Fiona Walker became a best-selling novelist in her 20s and her books have sold over two million copies worldwide to date. Dubbed ‘The Jilly Cooper of the Cosmo generation’ she is renowned for her large casts, addictive plots and sharp wit. She lives in rural Worcestershire with her partner Sam who is a dressage trainer and their two daughters. Her twelfth novel, The Love Letter, is published by Sphere.Find her on her blog and on Twitter @FionaWalkeruk

This entry was posted on July 18, 2012, 6:53 am and is filed under Undercover Soundtrack. You can follow any responses to this entry through RSS 2.0. You can leave a response, or trackback from your own site.