The Undercover Soundtrack from the underside – SJ Tucker

‘Passages from the novel have a song waiting between the lines’

Once a week I host a writer who uses music in their creative process. This weekend, to celebrate a year since the release of My Memories of a Future Life, I’m turning The Undercover Soundtrack inside out and talking to two musicians who have been inspired by novels featured on this series. 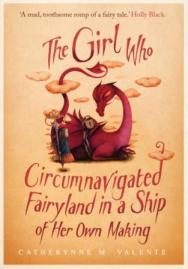 Today I’m talking to SJ Tucker, @s00j, who has composed entire albums to novels by Catherynne M Valente, and most recently for The Girl Who Circumnavigated Fairyland In A Ship Of Her Own Making.

Sooj, how did you write September’s Rhyme, the song for Catherynne M Valente’s book trailer?
September’s Rhyme was inspired by chapter one, where September has to figure out how to get herself into Fairyland. The Green Wind gives her lots of advice, but most of it she finds confusing rather than helpful. To her credit, she finds a way to make it work for herself rather quickly. September’s Rhyme is a teaching song, to help September and other potential heroines remember the formula for the riddle that must be solved to pass the border into Fairyland. I was sitting in the doctor’s waiting room when I wrote it, reading the manuscript on my laptop.

Catherynne says you’ve written several albums based on her stories. How do you condense a novel into a set of songs? How do you do justice to a novel’s world and characters in a different medium?

Cat’s work is so descriptive and inherently musical to me that the songs fall into my lap as I read. I get ideas left and right. She keeps me pretty busy. My creative process is straightforward where Cat is concerned: start reading and get my butterfly net ready, ’cause the ideas are coming!

So far, I’ve written songs inspired by The Orphan’s Tales duology: In the Night Garden, In the Cities of Coin & Spice, Palimpsest, The Habitation of the Blessed, Deathless, and The Girl Who Circumnavigated Fairyland in a Ship of Her Own Making.

Cat’s novels strike me as being like a family – in the characters, stories and scenes there are aunts and uncles and cousins and parents and grandparents. Some of those family members, you don’t see but once a year at Thanksgiving. Some of them are part of you from the very beginning. Others can surprise you and become vital later on. That’s how I’ve approached writing the songs and albums to accompany Cat’s work.

I write songs about the characters and scenes that strike me on first view. Then I look for anyone I might have left out who needs time in the spotlight. Then I make time for the surprises – the things I never expected to write a song about. Sometimes Cat has written a song into a book for me to find and set to music, as in the case of Go To Sleep Little Skylark, a lullaby in The Girl Who Circumnavigated Fairyland.

I have songs inspired by Lewis Carroll, Seanan McGuire, Terri Windling and one collaboration with CSE Cooney. Lots of other collaborations and inspirations are in the works. So far, Cat is the only contemporary author who has gotten my song engine to bear fruit more than once. It doesn’t hurt that we pretty much agreed to be good friends the moment we first met. That was back in 2006, when she was on the cusp of releasing The Orphan’s Tales.

How long does it take you to write an album? Do you redraft much? Do you write first, then take it to the studio, or does the song evolve in the recording?
I take a terrifying number of notes. Thank goodness for laptops – specifically for voice memo recording and document catching software.

Every novel I decide to write songs for gets its own master file on my laptop, where all of the ideas for songs go. I’ll often include passages from the novel, the sections that I know have a song waiting between the lines. 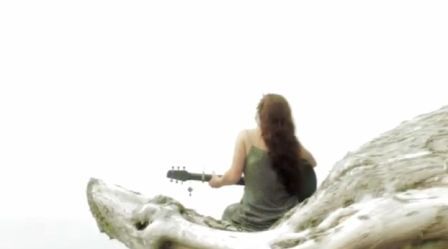 From the video for SJ Tucker’s song ‘Neptune’

Sometimes, getting all of the songs out, or even coaxing just one along, can take months.
Sometimes I’m intensely self-critical, as I’m sure most writers are. Fortunately, redrafting for me usually involves moving stanzas around, catching new verse ideas as they fall, and singing different versions into my laptop or iPhone. It’s a very satisfying process, especially when I feel ready to share. There’s nothing like playing a new creation for its first audience, watching expressions and getting first opinions.

Again, it all started with Cat’s duology The Orphan’s Tales. She mentioned that someone had done an instrumental album for her first novel, The Labyrinth. And ‘wouldn’t it be cool if somebody did an album for The Orphan’s Tales?’ I had devoured The Orphan’s Tales, but it didn’t occur to me until that day that Cat and I would eventually go on tour together and present many an odd multimedia book-and-song circus all over the country. But I went down into her basement for a couple of hours and came back with a song called The Girl in the Garden, and we all wept.

I play a song for an audience several times before I take it to the studio. Part of the reason is that I am constantly touring and performing. I have to slow down in order to get recording done. Also, songs evolve when I play them live. Verses shift, entire new sections present themselves, which I didn’t even know were missing. I’ve learned to let a song have time to bloom before I put it in front of the machines to be captured.

Some authors might be wondering about approaching a songwriter for a trailer. How much does it cost? Are there any rights issues? Do you release the music on your own album too?
I have a flat rate for song commissions, but each time I’ve had a song already written that the author and trailer director were specifically requesting. Paying mechanical rights to the songwriter is an option, but as anything that officially involves my music on Youtube is free advertising for me, I usually only require a link to my download page and proper songwriting credit in the video description, or in the video itself. And yes, I release just about every song I write that I feel is good.

I love that my songs are used in book trailers. The more we all cross-pollinate and cross-promote our work, the more people will find out about us. I urge other indie musicians to say yes to opportunities like providing music for book trailers, because you could find a whole new audience. Cat’s and my mutual fans are some of my favourite people on earth, and they are legion.

Let’s face it: there are millions of us, writers and songwriters alike. If we form alliances and create memorable shared works, the world is a lot more likely to pick us out of the crowd and join our little circus. The more we help each other out, the more we retweet and link for each other, the more beauty we can create, the more fuel we will have for our creative fires, all of us. That’s what I want for all of the creative folk I know – to be our own renaissance.

The Undercover Soundtrack will be back in conventional authorly form on Wednesday – and as it’s anniversary week there will be a chance for commenters to win a very special prize… To make sure you don’t miss it, subscribe now!

authors, Catherynne M Valente, composers, Deathless, drama, entertainment, fantasy, green wind, how to write a song, how to write a song about a novel, how to write an album from a novel, In the Cities of Coin & Spice, In the Night Garden, literature, making a book trailer, music, music for book trailers, music for writers, music inspired by books, musicians, My Memories of a Future Life, Nail Your Novel, Palimpsest, Roz Morris, singer-songwriters, SJ Tucker, songs, songwriters, songwriting, teaching song, The Girl Who Circumnavigated Fairyland in a Ship of Her Own Making, The Habitation of the Blessed, The Labyrinth, The Orphan's Tales, The Undercover Soundtrack, undercover soundtrack, Undercover Soundtrack from the other side, writing, writing to music

This entry was posted on September 9, 2012, 7:58 am and is filed under Undercover Soundtrack. You can follow any responses to this entry through RSS 2.0. You can leave a response, or trackback from your own site.