‘The strangest, most terrifyingly delirious music’

Once a week I host a writer who uses music as part of their creative process – perhaps to tap into a character, populate a mysterious place, or explore the depths in a pivotal moment. This week’s post is by Tom Bradley

My current book (Family Romance) and my next (We’ll See Who Seduces Whom) are ekphrases. Ekphrasis is by definition synaesthetic: two or more art forms, under the aegides of disparate sense organs, mutually interpenetrate. And who is the greatest synaesthete of post-antiquity? Alexander Nikolayevich Scriabin.

Family Romance and We’ll See Who Seduces Whom are explicitly Scriabinesque in their merging of visuals and verbals. In both books I have accepted the challenge posed by stacks of preexisting art. Nick Patterson is my collaborator in the former book, David Aronson in the latter. Their pictures came first, and I made the fiction and poetry, respectively, around them.

My method was derived explicitly from Scriabin’s unfinished monstrosity: the Mysterium. It’s a week-long rite, an apocalyptic liturgy of ‘omni-art’ that absorbs and dissolves the entire sensorium: not just the visual, but auditory, tactile, olfactory, gustatory, and even the famous ‘sixth sense’ of the Buddhists, comprising manas and dharma. My particular art form, literary, can be said to engage the sixth sense most directly.

While our books are contained between covers, Scriabin’s Mysterium requires an entire gorge in the foothills of the Himalayas. It’s meant to be celebrated in a strangely protean cathedral, built expressly for the occasion. This edifice will writhe and swell like a transcendent amoeba. Scriabin says: ‘…it will not be constructed of one single type of stone, but will continually change with the atmosphere and motion of the Mysterium’. The architecture is made malleable with psychoactive aerosols and the rhythmic projection of colors by a tastiera per luce, or ‘keyboard of lights’. (Parts 2, 3, 4, 5 are here.)

Family Romance and We’ll See Who Seduces Whom are less labor intensive and don’t require such a large budget, but the idea is the same: what corresponds to brick and mortar in a printed work becomes protoplasmic as Scriabin’s venue. The illustrations of Nick Patterson and David Aronson, while divergent in style, share this shape-shifting quality. Though static in the literal sense, the longer these images are stared at, the more motion they communicate. It’s only natural to intermingle them with prose and poetry: those two contrivances that traverse time and space more efficiently, and violate solidity more contemptuously, than any other human inventions.

Part of Debra Di Blasi’s program at her great synaesthetical Jaded Ibis Press is to add a soundtrack to each of the books she publishes. I am recommending she make our track Alexander Nikolayevich Scriabin, for he just happens, by coincidence, to have written the perfect music to help me encompass my job of explaining how the Pattersonian and Aronsonian bizarreries came to be juxtaposed.

If Scriabin is the inner ear of our books, he comprises the entire central nervous system of the Mysterium. Cast in the role of Celebrant, he is seated at his grand piano in the very apse of the gaseous temple, directing what sounds like an orchestra of thousands. They are playing the strangest, most terrifyingly delirious music. A gigantic brace of mixed antiphonal choirs produce a roar without words, identified spontaneously in my mind with certain moiling mobs who stomp through Nick Patterson’s paintings: grotesqueries with shoulder teeth, problematic crotches, and ostrich legs.

I came to call these physiologically peculiar choristers, these inarticulate roarers, the Relic Amalekites. You might recall from the first book of Samuel the penalty of genocide having been declared upon their remote ancestors by Jehovah. Their vocalizations are often washed away as by a current of God-cursed blood, so I have placed the Relic Amalekites’ home turf — or, rather, home sand–on the banks of a river. When you listen to the Mysterium, you will understand why this waterway could only be called the Judeuphrates.

But from whose simultaneously super- and subhuman larynx issues the single voice that comes stabbing through the rout of Relic Amalekites? It’s a horrifically sublime soprano soloist, also unendowed with the capability of human speech. I knew, of course, that she could only be the aural counterpart of the naked woman who haunts so many of our books’ illustrations: a terrifying creature writhing and hemorrhaging across the pages.

Meanwhile, bells the size of yacht hulls, alloyed of platinum and electrum, are hung from cumulonimbic clouds that swell among the oozing cathedral’s corbelled vaults. These clouds are engendered and seeded by entire metric tons of cinnamon and sandalwood, benzoin and mace, storax and galbanum, combusting in boundless bonfires and wafting over the attending multitudes. In their simultaneous week-long orgasm, Scriabin’s spectators and performers gradually become cloudlike themselves, indistinguishable one from another.

At this late point in my writing it became useful to supplement the Mysterium with another orchestral work, Prometheus: The Poem of Fire. Scriabin actually managed to finish this piece before he died, so it was consulted in the concoction of the climaxes and denouements of our Family Romance and We’ll See Who Seduces Whom. 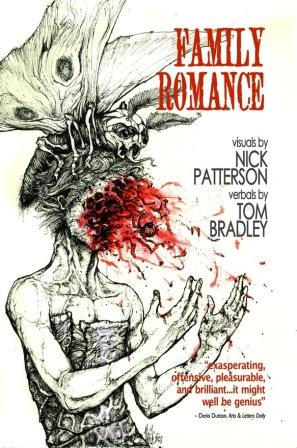 Up until the last chapters everything has been imbued with the famous Mystic Chord: C F# Bb E A D. All has been derived from iterations and inversions of this quartile pitch set, in endless permutations and combinations. Prometheus: The Poem of Fire miraculously, through a heroic act of will and faith on Scriabin’s part, draws the dissonance into a stable minor triad: F-sharp. This sonic normalcy rings out at the final moment, when Scriabin’s commixed congregation and clergy are atomized in the perfumed clouds and drugged mists.

The promethean mystery has popped its climax: nothing less than the annihilation of humanity and the engendering of a more vigorous race of beings from the primordial soup condensed in puddles among the cathedral cobbles. This corresponds perfectly to the moment, on the last page of Family Romance, where just such an extinction and transfiguration takes place within the consciousness of our protagonist. Nick Patterson depicts him as a blindfolded poet with huge hands, sweeping the strangest hieroglyphs upon a scroll that unfurls, roaring like a tidal wave. Scriabin can be sensed in that oglable roar.

Tom Bradley is the author, most recently, of Felicia’s Nose (MadHat Press), A Pleasure Jaunt With One of the Sex Workers Who Don’t Exist in the People’s Republic of China (Neopoiesis Press), Even the Dog Won’t Touch Me (Ahadada Press), Hemorrhaging Slave of an Obese Eunuch (Dog Horn Publishing), My Hands Were Clean (Unlikely Books) and Put It Down in a Book (The Drill Press), which was named 3:AM Magazine‘s Non-Fiction Book of the Year 2009. His next novel, with secret title and hidden nature, illustrated by the alchemical artist David Aronson, is coming next year from the occult publisher Mandrake of Oxford. He’s also a member of the League of Extraordinary Authors. Further curiosity can be indulged here.

This entry was posted on May 8, 2013, 7:56 am and is filed under Undercover Soundtrack. You can follow any responses to this entry through RSS 2.0. You can leave a response, or trackback from your own site.