Once a week I host a writer who uses music as part of their creative environment – perhaps to connect with a character, populate a mysterious place, or hold a moment still to explore its depths. This week my guest is contemporary fiction author, poet, editor and singer-songwriter Jessica Bell @MsBessieBell

White Lady is written from the perspective of five different characters, each in first person, so, in addition to my usual character-defining tactics, I decided to give three of them specific music tastes. These music tastes also really helped to mould the personalities of these characters, and made it easier for me to write in their different voices.

The musical soundtrack fan: Somewhere Over the Rainbow by Judy Garland

Sonia Shâd, an Australian/Turkish high school mathematics teacher and wife of Melbourne’s leading drug lord, is addicted to slicing people’s throats and admiring the blood cascade down her victims’ chests.

Now the clichéd thing to do would have been to make her a fan of heavy metal. I didn’t want to go the typical route. Instead, I thought it would be a little more creepy having a song associated with innocence and finding true bliss linked to Sonia finding her true bliss—the pleasure of a kill.

I’ve also used the rainbow as a metaphor for Sonia’s passion for numbers:

It is seven a.m. and everyone’s mailboxes are decorated with dew. When I was a child, I liked to think the dew meant fairies had been out to play during the night. Especially when the sun shone through dispersive prisms of condensation, creating a field of colour across my front lawn. It was the rainbow that first got me interested in mathematics and physics, and its ever-elusive pot of gold. It didn’t take long for me to rationalize that the pot of gold was simply the bait to enrich my knowledge.

As an extra quirk, Sonia’s doorbell plays this song when it’s pressed.

Mia Weston is an insecure overweight high school student, who turns to drugs to lose weight, and experiments with her sexuality to manipulate her drug dealer. She falls for Sonia’s son, Mick, and gets caught up in his family’s criminal activities. She enjoys every minute of it, because it makes her feel beautiful. She experiences a tug of war with her conscience — good girl (who is insecure about her looks, and wants to be a good daughter for her single father) versus bad girl (a beauty queen in Mick’s eyes, and bold and confident when engaging in illegal activities).

Mia is also an aspiring songwriter and turns to these female rock goddesses for inspiration.

I don’t, however, just use these songs to represent Mia’s personality. I make sure the songs appear in the story when the lyrics actually mean something to the scene.

For example, she turns Dirty Jeans up full blast when she realizes she might be falling for Mick. The first line of the song is about being attracted to an ordinary boy. Mick is far from an ordinary boy. Mia listening to this song is almost trying to convince herself that there is nothing to worry about, that Mick may be different than most, but deep down he is normal and she will be safe with him. At the same time, it also gives her a false
sense of self-esteem when she imagines the lyrics, about being beautiful, are being sung to her directly.

On the opposite end of the scale, when Mia is feeling guilty about her actions, she listens to Skinny Little Bitch, glorifying that fact that she is acting like one herself. Of course, she’s still romanticising about being skinny. It’s easier for her to be a ‘skinny bitch’ than an overweight one.

The Metal Head: Never Never Land by I Killed the Prom Queen; Creeping Death by Metallica

On the surface, Mick Shâd (Sonia’s son) is an absolute thug. He’s foul mouthed, exhibits violent and crude behaviour, and shows no respect to anyone whatsoever. Yet, deep down, he is a gentle sweetheart with a poetic soul, which readers witness through his scenes with Mia.

All his life he has been exposed to the illegal activities of his parents. The biggest thing that haunts him to this day is the blood stain on the back porch, along with the memory of Sonia tucking him in one night without having properly washed the streaks of blood off her skin.

Mick listens to hardcore music to escape his hardcore reality. It’s a way for him to shut the world out when he needs to be alone. Readers also get the hint that he prays to Allah on his seccade (a Muslim Prayer mat in Turkish), when he’s alone in his room too. He clearly has a conscience.

The songs I’ve mentioned above are not actually cited in the novel. Only the bands. This is because Mick isn’t the type of guy to describe what he’s listening to. He just turns his stereo on full blast — full stop. We also experience the loud music coming from his bedroom through Sonia’s perspective, in which she recognises the bands, but can only make out the sound of roar roar roar.

Despite readers never knowing what songs Mick listens to, these are the songs I had in mind when writing the scenes these bands are mentioned in. If you look up the lyrics to these songs, you will glean a lot of meaning from them and how they relate to the story. Though I would have loved to explain all these details in the book, they just didn’t fit. So I had to resolve myself to the fact that they would remain hidden (a true Undercover Soundtrack!”) 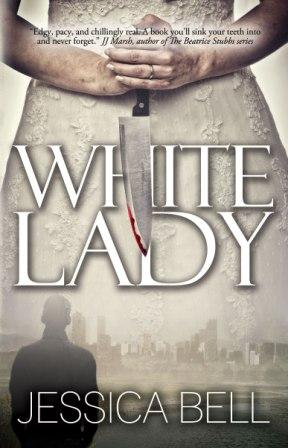 If you ever decide to use music for writing inspiration, have a think about how you can create symbolic branches to your music of choice in your story. Not only does it provide a fabulously diverse platter of character food, but it’s also nutrition for your plot. I don’t think I have ever written a book which didn’t incorporate music in one form or another. And now I don’t think I could ever write without it.

Is your story lacking the nutrients it needs? Perhaps some music will help!

Jessica Bell, a thirty-something Australian-native contemporary fiction author, poet and singer/songwriter/guitarist, is the Publishing Editor of Vine Leaves Literary Journal and the director of the Homeric Writers’ Retreat & Workshop on the Greek island of Ithaca. She makes a living as a writer/editor for English Language Teaching Publishers worldwide, such as Pearson Education, HarperCollins, MacMillan Education, Education First and Cengage Learning. Connect with Jessica online at her website, retreat & workshop, blog, the Vine Leaves Literary Journal, Facebook and Twitter

GIVEAWAY To celebrate the release of White Lady, Jessica is giving away an e-copy (mobi, ePub, or PDF) to a random commenter of this post.

This entry was posted on October 29, 2014, 7:01 am and is filed under Undercover Soundtrack. You can follow any responses to this entry through RSS 2.0. You can leave a response, or trackback from your own site.