‘Close your eyes and listen with your hands’

Once a week I host a writer who uses music as part of their creative environment – perhaps to connect with a character, populate a mysterious place, or hold  a moment still to explore its depths. This week’s guest is fiction editor and creative writing teacher Tawnysha Greene @TawnyshaGreene

My narrator is hard of hearing like myself, so many of the scenes including music in A House Made of Stars are ones in which the music is felt rather than heard. For example, the narrator’s cousin earns a part in The Wizard of Oz, and as she practises her songs in her room, the narrator and her deaf sister watch, hands placed on the stereo to feel the rise and fall of the music.

Similarly, as I wrote these scenes, I played Over the Rainbow by Harold Arlen and EY Harburg on my laptop and turned the music up loud, so that I could close my eyes and listen with my hands to feel the same notes the characters in my novel did. This way, I could be closer to my narrator, a girl who struggles through poverty and abuse and who wishes for a better life for her and her family.

While writing the majority of A House Made of Stars, the music I listened to was usually instrumental. One of my favorite musical collections was The Most Beautiful Soundtracks (No. 2), and guided by these songs, my novel began to take shape. The following individual songs from this compilation were especially helpful — Comptine d’un autre été by Yann Tiersen, I Giorni by Ludovico Einaudi, and The Promise by Michael Nyman. The quickness of these pieces, especially The Promise and the way the notes would domino into one another helped me with the pacing of my novel, because I wanted each scene to tumble into the next so that the story’s momentum would be constantly moving forward as the narrator and her family’s situation become more and more dire.

However, in some cases, it was necessary for me to slow down the scene and concentrate on smaller details. My narrator is very observant and what she lacks in hearing, she compensates in what she sees and understands. The song Childhood by Alexandre Desplat played on repeat while I wrote these scenes, and the way the song is composed is appropriate for the realisations the narrator makes during these instances — Childhood is slow with distinct piano keys forcefully played one at a time in a way that causes each note to be almost jarring. Similarly, during the moments in which I chose to listen to this song, the narrator makes discoveries about her family — read in a diary hidden underneath the stairs and glimpsed through the wooden slats of a bedroom closet — moments that are jarring for her as well.

Regardless of the scene, music served as a catalyst for the general mood of A House Made of Stars, and towards the end when I wrote the last act in which the narrator and her family are homeless and starving, I listened to Hans Zimmer’s To Zucchabar. The duduk’s haunting melody is accompanied by isolated drum beats in the background, an interesting progression from the pronounced notes of Childhood, because these notes are more subdued and allow the duduk’s voice-like melody to take center stage. The music is appropriate for this final leg of my narrator’s journey, because she, too, is finally finding her voice and speaking for herself and her family against all odds. 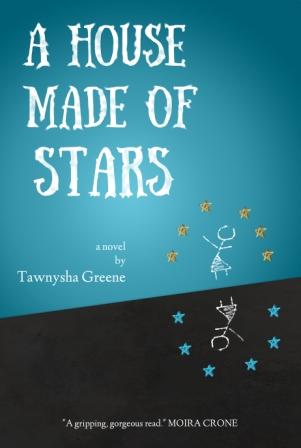 When I wrote the last scene, I did not play just a single song. I played all of them. The compilation of The Most Beautiful Soundtracks (No. 2) sounded in the background as I wrapped up the story with my narrator looking up into the night sky. By then, she was all those songs. She was the drum beats, the piano notes, and the duduk’s melody as she reached for the stars and made them her own.

Tawnysha Greene received her PhD from the University of Tennessee where she currently teaches fiction and poetry writing. She also serves as an assistant fiction editor for Cutthroat: A Journal of the Arts and is a regular reader for the Wigleaf Top 50 series. Her work has appeared in PANK Magazine, Bellingham Review, and Necessary Fiction among others. A House Made of Stars is her first novel. Find her on Twitter @TawnyshaGreene, on her website and on Facebook.

GIVEAWAY Tawnysha is excited to sponsor a giveaway of A House Full of Stars. To enter, simply share this post – and then comment here to let us know. The more platforms you share on, the more entries.

This entry was posted on July 21, 2015, 11:22 pm and is filed under Undercover Soundtrack. You can follow any responses to this entry through RSS 2.0. You can leave a response, or trackback from your own site.