The Undercover Soundtrack – Steven A McKay

Posted by Roz Morris @Roz_Morris in Undercover Soundtrack on May 21, 2014

Once a week I host a writer who uses music as part of their creative environment – perhaps to connect with a character, populate a mysterious place, or hold  a moment still to explore its depths. This week my guest is Steven A McKay @SA_McKay

Music has been a big part of my life ever since I was a teenager and I discovered hard rock and heavy metal. Now, more than 20 years later I still have music playing constantly, from the moment I get into the car for work in the morning to when I go to bed at night with my earphones in and Jethro Tull’s Thick As A Brick or A Passion Play turned up loud. 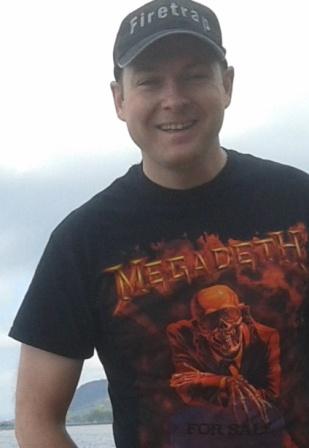 Obviously then, music would be heavily involved in the creation of my two novels, Wolf’s Head and The Wolf and the Raven which are my take on the Robin Hood legend. All the familiar characters are there: Little John, Will Scarlet, Sir Richard-at-Lee etc but, in setting the books in early 14th century Yorkshire rather than 12th century Nottingham and telling it using a modern, adult style, I’d like to think I’ve taken a fresh new approach to what is a well-known legend. Music has played a massive part in that process.

For me, it’s not as simple as sticking on an Iron Maiden CD and sitting down to fire off a couple of thousand words. Sure, Maiden, Metallica, Megadeth, Def Leppard etc are all bands I love but the problem is I’m also a lead guitarist with a rudimentary skill in drumming and bass playing and for a while I was also singing when my band-mate and I got together with acoustic guitars to jam Led Zeppelin and the like. So, if I sit down to write with a hard rock or traditional metal song on, the writing goes out the window because I end up tapping my feet, singing along in my head and, eventually, I’ll just get up and plug in one of my guitars to pretend I’m Eddie Van Halen or Slash. Yes, in front of the mirror!

Many people like to meditate to the sounds of waterfalls or waves or soft rain – white noise basically. It allows the mind to focus and blocks out any distractions from the outside world. When I write my books I like to try and capture a similar, almost ritualistic state of mind, where I can lose myself completely in the scenes I’m creating. A song like Def Leppard’s Pour Some Sugar On Me or Iron Maiden’s Run To The Hills, as much as I like them, have such strong melodies, big choruses and are just so damn catchy that they’re completely useless for this purpose.

That’s where something a little more extreme comes in. Black metal. My novels are both set in the early 14th century, and a lot of black metal bands come from Scandinavia, where they try to recapture the essence of those Dark Medieval Times (a Satyricon album title). The music, to most listeners, is just noise. There’s little, if any melody, the drumming is often ludicrously fast and the vocals are akin to tortured screams. Lovely! That’s just what I need – you’re not likely to find yourself tapping your feet or trying to sing along to something like Havenless by Enslaved. But when you’re writing a scene about outlaws in the forests of Yorkshire sitting around a camp-fire at night, drinking ale and telling tales there’s nothing better than this song to help you invoke just the right atmosphere.

Similarly, my novels have a lot of (hopefully not gratuitous) violence in them, from one-on-one duels to the death to full-scale battles. Playing something like Bon Jovi’s You Give Love A Bad Name just isn’t going to do it, right? But Slaying the Prophets ov Isa (closer to death metal than black metal) by Behemoth will:

Crafting a novel isn’t all about the writing though. Certain songs, and the artist’s live performance of them, often strike a chord within us that eventually comes out in a scene. In Wolf’s Head a couple of my characters performed while pretending to be strolling minstrels. Anyone that knows me will understand exactly where that idea came from: Jethro Tull and, in particular the song Minstrel In The Gallery. Something about Tull’s music just reeks of “merry olde England” (despite the fact Ian Anderson is, like me, a Scotsman) and, while I can’t write while listening to them for the reasons described above, I DO get many of my best ideas for plot-lines while listening to them, since I have them playing in the background for most of my days.

While I’m on the subject of Tull I should mention another great folk-rock band with a flair for music inspired by the middle-ages: Fairport Convention. On their 1969 album Liege and Lief they recorded a version of the traditional song Matty Groves. I lifted the name and used it for one of the characters in my books. A reader asked if it was the same person. Maybe it is…

That’s the creating and actual writing out of the way then – what about editing and, indeed, this piece you’re reading now? Well, editing and blog writing requires much less of a shift in consciousness: there’s no need to completely lose yourself within what you’re doing. No need to allow your muse to wholly consume you. For that reason, I can listen to things with a little more groove, a little more melody and maybe even a few hooks. Like Death’s Pull the Plug, which is what I’m listening to right now (probably best not to sing along though).

Being a musician myself has come in handy when creating video trailers for my books. For Wolf’s Head I used a piece I wrote on the mandolin while The Wolf and the Raven features an Iron Maiden knock-off I wrote in my head pounding the streets of Glasgow as a meter reader. Thank you for reading (and listening)!

Steven A McKay was born in 1977, near Glasgow. He lives in Old Kilpatrick with his wife and two young children. After obtaining a Bachelor of Arts degree he decided to follow a lifelong ambition and write a novel. He plays lead/acoustic guitars (and occasional bass/vocals) in a heavy metal band. He is the author of Wolf’s Head and The Wolf and the Raven, which reached number 1 in Amazon’s War category. Find him on Twitter as @SA_McKay and connect with him on Facebook and his website.

GIVEAWAY Steven is offering a signed copy of Wolf’s Head to a commenter here! To enter, leave a comment here, and if you share the post on other social media that counts as extra entries (but don’t forget to note that in your comment on this post)