Posted by Roz Morris @Roz_Morris in Undercover Soundtrack on February 6, 2013

‘The visceral feeling when a piece strikes me right’

Once a week I host a writer who uses music as part of their creative process – perhaps to open a secret channel to understand a character, populate a mysterious place, or explore the depths in a pivotal moment. This week my guest is urban fantasy writer Paul Anthony Shortt @PAShortt

Music is one of the most vital tools I have as a writer. The visceral feeling when a particular piece strikes me just right is astounding, whether it’s a film score or a favourite song. When I write I picture the scenes as though they were a movie in my head, and for me, the score of a movie is often as important as the acting or the scriptwriting. So it felt completely natural for me to use that response to music to help my writing. 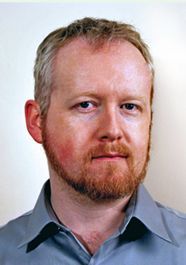 When writing Locked Within, I listened to a very specific selection of music to get me into the right mindset. In addition to my ample collection of film scores for action scenes and keeping both my own pace and the pace of the writing as fast as possible, I used certain tracks to help focus on certain aspects of the book.

A city that doesn’t want to be saved

For the suffering of New York’s clued-in citizens under their supernatural rulers, I used a cover version of We Don’t Need Another Hero by Northern Kings. Their version has hard, heavy guitar riffs and a desperate, pleading chorus that evokes such a sense of passionate resignation. It was perfect for keeping me grounded in a city that doesn’t want to be saved, even though it needs to be so badly.

As my hero, Nathan Shepherd’s theme song, I chose Locked Within The Crystal Ball, by Blackmore’s Night. It has a haunting quality to it that fills my mind with images of warriors in different times. It resonates so perfectly with my story of a reborn hero trying to remember his past lives and stop an evil monster.

Finally, to remind myself of what my hero was fighting for, and to strengthen my mental movie’s closing scene, I kept the final track from Sarah Brightman’s Fleur Du Mal album on my playlist. It’s a march that starts low and builds to a triumphant fanfare, helping symbolise, for me, my hero’s acceptance of his destiny and role as New York’s protector.

Quite simply, I don’t think I could write if I didn’t have music. There are times I wish my readers could hear the music I have in mind for each scene, because part of me wonders if they’re missing out on an element of the story that I just can’t put into the page. When I write, I try to put that emotion, that raw power I feel from music, into the words of my story. If I can bring about those feelings in a reader, even for a moment, then I know I’ve done my job.

A child at heart who turned to writing and roleplaying games when there simply weren’t enough action figures to play out the stories he wanted, Paul Anthony Shortt has been writing since he was a child. Growing up surrounded by music, film and theatre gave him a deep love of all forms of storytelling, each teaching him something new he could use. When not playing with the people in his head, he enjoys cooking and regular meet-ups with his gaming group. He lives in Ireland with his wife Jen and their dogs, Pepper and Jasper. Their first child, Conor William Henry Shortt, was born on July 11, 2011. He passed away three days later, but brought love and joy into their lives and those of their friends. Paul’s first novel, Locked Within, is published by WiDo Publishing. The sequel is out later this year. Find him on his blog, Facebook and Twitter @PAShortt