Posted by Roz Morris @Roz_Morris in Uncategorized on June 20, 2012

‘I wanted music that was angry and soulful, both at the same time.’

Once a week I host a writer who uses music as part of their creative process – perhaps to tap into a character, populate a mysterious place, or explore the depths in a pivotal moment. This week’s post is by multi-award-winning crime author Zoe Sharp @AuthorZoeSharp

Music has always played a big part in my creative process, usually at a low volume in the background so it goes in on an almost subliminal level while I write. My CD collection contains wildly varying music from Gregorian chants and opera to Cajun and Zydeco. And just about everything in between.

For Fifth Victim: Charlie Fox book nine, it was particularly relevant. The whole theme of the book is not knowing what you’ve got until it’s too late.  I wanted music that was angry and soulful, both at the same time.

By this stage in the series Charlie Fox is back at her close-protection job as a means to bury personal tragedy. She welcomes the dangers involved, despite the concerns of those closest to her. I listened to songs that stoked up those emotions while I worked, and the volume was cranked much higher than usual for most of the time. I was looking for an almost resentful tone, like that in Breaking Benjamin’s Breath.

Fifth Victim is a story told on a deadline — it has a ticking clock of kidnap and ransom where the outcome is not at all certain. The relentless beat of Nirvana’s Come As You Are really seemed to work with that. The MTV Unplugged live version is one that gets into your head and stays there all day. I revisited it while writing this piece, and it’s stuck there again now.

All through this story Charlie is working under pressure, constantly improvising and reacting. For those action scenes I needed a soundtrack with energy and raw power that also spoke of experience and loss. Linkin Park’s New Divide got a real hammering, as did Moby’s Extreme Ways.

But there are quieter, more reflective moments. Tasked to protect Dina Willner, the daughter of a wealthy Long Island doyenne, Charlie is asked if she’s prepared to sacrifice herself for her principal. At the time, Charlie says she hopes it won’t come to that. But later, at the hospital bedside of her lover — fellow bodyguard Sean Meyer — who has been in a coma for over three months after a near-fatal shooting, she thinks differently:

‘It didn’t give any comfort that Sean had gone down in the line of duty, as he would have seen it. Doing his job. Hesitation had never been a possibility with him and it seemed that to hesitate now would be to let down everything he’d stood for. So if it came to it, I thought fiercely, then yes, I would die to protect Dina Willner, as her mother had asked.

And maybe I’d do it just a fraction more willingly than I might have done, a hundred days ago.’

The longing and loss of such moments was beautifully summed up by A Fine Frenzy’s Last Of Days, and by Pink’s Glitter In The Air. 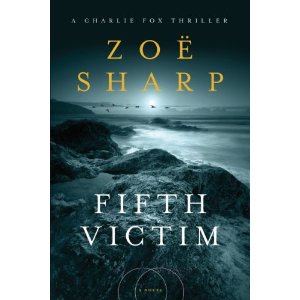 But the biggest musical moment of Fifth Victim came between the final edits and publication. I was contacted by the hugely talented US singer/songwriter, Beth Rudetsky. She wanted to write a song inspired by the book. I was stunned when she sent me The Victim Won’t Be Me, for which the students of Vision West Notts then produced a terrific video. The song is an interpretation of the book, and the video is an interpretation of the song.

The resulting combination is beautiful and haunting. And it is definitely part of my soundtrack for the next instalment in the Charlie Fox series.

Zoë Sharp wrote her first novel when she was fifteen, and created the no-nonsense Charlie Fox after receiving death-threat letters as a photojournalist. Her work has been nominated for the Edgar, Anthony, Barry, Benjamin Franklin, and Macavity Awards in the United States, as well as the CWA Short Story Dagger. The Charlie Fox series was optioned by Twentieth Century Fox TV. Zoë blogs regularly on her own website, and on the acclaimed Murderati group blog. You can also find her on Facebook and Twitter (@AuthorZoeSharp).