Posted by Roz Morris @Roz_Morris in Undercover Soundtrack on June 30, 2015

‘Music that seeps beneath your skin, then grows’

Once a week I host a writer who uses music as part of their creative environment – perhaps to connect with a character, populate a mysterious place, or hold  a moment still to explore its depths. This week’s post is by author, editor, journalist and musician Andrew Lowe @andylowe99

That was his tragedy. He didn’t yet know that fear was more powerful than love.’

The Ghost is a novel about violence. At its centre is an act of extreme violence, perpetrated by three children. The book tells the story of how the consequences trickle down through time; a slow-acting psychological poison which engulfs the three children in adulthood.

I wrote it as a crescendo: smouldering beginning, gathering middle, explosive ending. 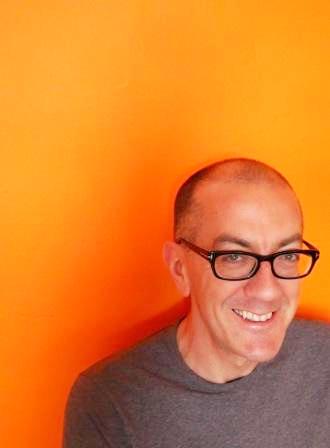 I didn’t completely throw away the structure rulebook. I understand that continuous intensity will exhaust the reader, and so there are dropouts of release, spikes of hypertension, recurring motifs and anchoring asides.

In other words, I wanted it to feel like a lot of the music I love – the kind that steals over you, seeps beneath your skin and then grips and grows and grows.

Music is as vital a part of my life as light or air. I’ve always struggled with the idea of ‘background’ music in film or television. My favourite filmmakers bake it into the centre of the drama – as commentary to underscore the action, as soundscape to emphasise landscape. They also use the absence of music to wrongfoot the viewer into relaxing. (Is there anything less shocking than a jump scene telegraphed by a rising note and announced with a jarring chord?)

Music informs my writing in a similar way. It’s not there on the page, but it’s always present in my plotting brain and typing fingers.

When I’m not at my desk, I play out the scenes – particularly the set-pieces – on an internal cinema, soundtracking them with music in my headphones. Almost every story peak in The Ghost was conceived in this way; the events were enhanced by a vivid awareness of the sound which surrounded them.

I suppose it’s a form of creative synaesthesia. Before I write a word, most of my moments are steeped in distinct aural flavours. I find it difficult to write a significant sequence before seasoning its mood with music in this way.

The book follows two separate timelines in the life of lead character Dorian Cook: his impoverished childhood in early 1970s industrial England, and his working life as an adult film critic in modern-day London. As the present-day Cook realises he is being held to account for his actions as a child, the past timeline builds up to the inciting event itself.

The house carried an unholy chill that flowed deep through its foundations – a vaporous spectre of cold that first stirred in late August and had the place comprehensively haunted by December.’

For the austere 70s chapters, I favoured songs which seemed to define Cook’s world: corporal punishment, factory discharge, municipal menace. The clamour and whisper of Joy Division’s Heart and Soul; the inner-city palpitations of Burial’s Loner; and the slouching panic of Nine Inch Nails’s Corona Radiata, with its sense of impending reckoning which mirrors the book’s recurring first line:

Something was coming up the stairs.’

Two key sections in the past timeline take place during the notorious UK heatwave of 1976. At the time, I remember sweltering with a strawberry Mini Milk as my tiny portable radio squeaked out Minnie Ripperton’s ever-lovely Loving You and Mungo Jerry’s lascivious In The Summertime. But for the story I was telling, I needed Sketch For Summer by The Durutti Column, with its synthetic birdsong and rebounding guitar – a song that always evokes the invincibility of childhood summers, and Larkin’s mighty line about ‘the strength and pain of being young’.

In the present day, two songs defined Cook’s marital and mental collapse: Missing by The xx – a hushed and horrified dissection of a crumbling relationship; and, as the threat from his past grows ever mortal and Cook is forced to plot a counterattack, Magazine’s The Light Pours Out Of Me sets the death-defying scene.

So, The Ghost is a novel about violence. The story is triggered by violence and it ends with violence – although not, I hope, of the sort the reader is expecting. The final sequence – a queasy kind of closure – was linked to Sigur Ros’s monolithic Festival, a song which emerges, ever so delicately, with a lone Icelandic voice keening beneath overlapping string notes. It hovers like a hummingbird, and then drops hard into a midsection of martial drumming, before lulling and at last detonating in a starburst of choral harmonies. It briefly, unbelievably, ramps up one more level before collapsing into a single voice again, this time whistling the melody.

It doesn’t give me The Chills; it gives me The Glow – a surge of whiskey-warmth. I must have heard it a hundred times and I still get it, around eight minutes in, as if something in the song is hardwired into me.

Fellow writers talk of how their characters ‘take over’ and dictate the narrative. Others claim the muse descends in a certain place, or country. For me, it’s music that guides me through, defining the lifts and rifts of the characters’ inner lives and choreographing their actions in bold, movie-like rhythms.

The Ghost has been described as a ‘dark’ book, but I hope some of my musical motivation pokes through to reveal the more complex qualities I was reaching for – redemption, restoration, courage, euphoria, enduring connection. These are all qualities I find in the music I love, which in turn rouses my writing.

Andrew Lowe is an author, editor and journalist who has written for The Guardian and The Sunday Times, and contributed to numerous books and magazines on film, music, TV, sex, videogames, and shin splints. He divides his time between various rooms of his home in London, where he writes and makes music (as half of electronic duo Redpoint). He gets out of the house by cycling and coaching youth football. The Ghost is his first novel, but it won’t be his last. Find him on his website, Facebook, Google +, Instagram and Twitter @andylowe99