Posted by Roz Morris @Roz_Morris in Undercover Soundtrack on August 28, 2013

‘It began as a buffer to domestic chaos’

Once a week I host a writer who uses music as part of their creative environment – perhaps to connect with a character, populate a mysterious place, or hold  a moment still to explore its depths. This week’s post is by contemporary romance author Jan Ruth @JanRuthAuthor

Music and books; possibly the best combination for legitimate daydreaming. Loosely speaking I’m in the ‘romantic genre’. I always balk at this description, it is so restricting and has been my downfall in the past when submitting to agents and so on. ‘It’s… not quite romance is it? And why are you writing it from the male point of view half the time?’ Well, like my musical muse, I like to mix it up a little. From the emotional scenes, from the windswept Celtic landscapes (Enigma, Clannad, Craig Armstrong, Sarah Brightman); to the drama of arson, relationship conflict and fast cars, (Morrissey, Kings of Leon).

I think I began using headphones as a buffer to block out those bloodcurdling screams of children playing nicely, or of husband making a noisy clatter in the kitchen (all devised to make me feel guilty for sitting at the typewriter). Of course, as this process developed, I began to get choosy as to the exact soundtrack. When I began to write Wild Water I used Roxy Music as a shameless buffer to domestic chaos. Don’t laugh, this was 25 years ago and it was the only cassette that worked in the machine. I’d like to make a point here that Bryan Ferry has nothing to do with my fiction, and in no way has he influenced the story but his crooning voice and the sheer volume was a combination which worked for me at the time, and in fact led to a whole new area of inspiration.

Now of course, I am so much more sophisticated, with my tiny earpieces and my subscription to Spotify.

I can drift into a trance merely be selecting the required track and outside noise does not penetrate my concentration. I am distracted instead now by the internet. I received an email once from my husband, who was apparently, standing on the doorstep holding his finger on the doorbell and clearly very cross indeed as he had forgotten his keys, and was I DEAF?

I find music a rich source of inspiration. I can listen to the same track and get back into a scene, almost like hypnosis. If I had to pick one single artist it would have to be Enigma. My story settings are Celtic; not that I write in a historical genre but all my settings are rooted in Snowdonia. Someone once described my backgrounds as separate characters in their own right – and I find Enigma dovetails very nicely into this concept with their spiritual chanting and long instrumental pieces which, although described as ‘new-age’, cross frequently into other genres, much like my writing!

I live in the perfect landscape for love. The endless complications of relationships form the basis of my stories and I think the challenge as a writer is to bring a fresh perspective to what can only be described as the well-worked themes of romance; although I do like to throw in the odd spot of domestic violence and arson, so maybe not your average visit to North Wales.

Are lyrics distracting? I tend to prefer instrumental pieces but then Sarah Brightman’s Gothic album Symphony has been a rich source of visualisation for me too; dramatic and haunting, her vocals are awe inspiring. Midnight Sky was very influenced by this album. The dark track Sanvean fitted the bereaved mood of the main male protagonist perfectly. I think I listened to it more than 200 times, and I still get goosebumps from the intro. Her mix doesn’t suit all scenarios though, and if I’m writing from a male viewpoint I am frequently drawn to The Kings of Leon – who isn’t? A rock buzz can be very helpful for fight scenes or maybe driving fast cars in an agitated state. The problem with this one is that frequently, it is me who is driving a not-very-fast-car, in an agitated state. Playing my ‘writing music’ in the car brings heaps of trouble; as soon a

s I step away from the keyboard and drive begrudgingly to the supermarket, I am besieged with ideas and snippets of astounding dialogue, all of which I try to remember or scribble down on the shopping list as I browse the shelves and yes, I usually end up scowling at the top ten paperbacks in there too.

My work in progress is about a 50-year-old clown of a man with a fixation for Morrissey. In the book, his fixation adds to the downfall of his marriage.

…For less than a minute she’d glared at his carefully guarded face, then suddenly made a lunge for his old guitar and slung it through the open bedroom window. Some of his Morrissey records followed, shimmering like black Frisbees down the garden.

That was the last straw, and she knew it.

My husband loathes Morrissey too…

Jan Ruth has written three full length novels; Wild Water, Midnight Sky and White Horizon, plus a collection of short stories, The Long and The Short Of It. She is a regular contributor to North Wales Yes magazine and is currently writing her fourth novel, Silver Rain. Find Jan on Facebook, Twitter and her website.

Posted by Roz Morris @Roz_Morris in My Memories of a Future Life, Undercover Soundtrack on February 8, 2012

‘A ballad about fairyland, which is not as sweet and innocent as most children’s books would have you believe’

The Undercover Soundtrack is a weekly series by writers who use music as part of their creative process – special pieces that have revealed a character to them, or populated a mysterious place, or enlarged a pivotal moment. This week’s post is by Arthurian fantasy novelist Katherine Roberts @ReclusiveMuse

I sometimes wonder if I write fantasy because I listen to folk music with its roots in legend and myth, or if it is the other way around. Whatever came first – the music or the fantasy – I do believe that one feeds the other, and music certainly plays an important part in my books. Well, with a debut novel called Song Quest, what did you expect me to say? 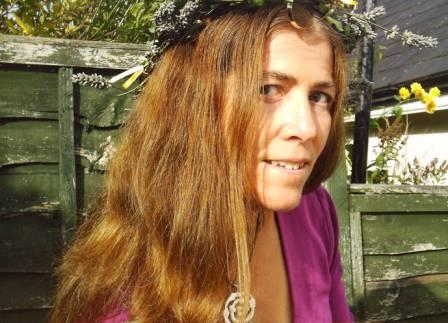 Songs for the dreaming stage

Moving on ten years, and that blend of folk and Celtic music is still very much playing in the background to my work. Even though I don’t actually write to music (I need silence for the words to come out), songs definitely inspire me at the dreaming stage. I love the haunting music of Clannad, which is often used as a soundtrack in the kind of films I enjoy, and I especially love traditional ballads about fairyland, which is not as sweet or innocent a place as most children’s books would have you believe. It was one such ballad – The Elf Knight performed by Steeleye Span from their album Time – that provided the undercover soundtrack to my new Pendragon quartet about King Arthur’s daughter.

Rather like Tam Lin, kidnapped by the fairy queen to pay a seven-yearly tithe to Hell, this ballad is a fairy kidnap story, but with a handsome elf-knight charming away a mortal princess. Unknown to the princess who answers the call of his horn, the elf-knight of the ballad has already slain seven kings’ daughters, and has chosen her as his eighth victim. But the resourceful girl tricks him, waiting until he falls asleep after their lovemaking and then tying him up and stealing his own dagger to take her bloody revenge:

Seven kings’ daughters have you slain here, but the eighth of them has slain you!

In Sword of Light my heroine Rhianna Pendragon has grown up on the enchanted isle of Avalon and is more than capable of turning the tables on any knight, fairy or mortal. But since she is a bit younger than the princess in the ballad, her elf-knight – Lord Avallach’s son, Prince Elphin –is her childhood friend and plays his enchanted harp to help Rhianna defeat her evil cousin Mordred, who has just killed King Arthur in battle at Camlann.

Inspired by the music, I even went so far as to write my own humble ballad for the book, with the verses running through the chapter headings. This is the verse from chapter 1, introducing Rhianna:

A maiden lives in Avalon’s hall,

Her spirit the purest of them all.

Brave of heart and hair aflame,

Since there are 14 chapters and verses in total, this turned into an editor’s nightmare as Emma Goldhawk at Templar rightly pointed out that younger readers of these books might not enjoy my lazy half-rhymes in the first draft, and made me rewrite them all so they rhymed properly… well, almost. (Sorry Emma – only three more books to go!) 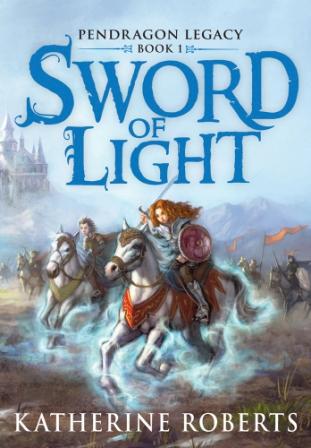 Of course, with Prince Mordred’s greedy eyes on the throne of Camelot, the book also has plenty of battle scenes. For these, I turned to Maddy Prior’s album Lionhearts, which is set rather later than King Arthur in the time of Richard Lionheart and the Crusades, but has an atmospheric track War Games with a background of hoofbeats and the first line, which evoked for me a wonderful image of King Arthur’s knights riding out from Camelot into battle.

So we come to a perfect example of writing feeding back into the music. I discovered Maddy had also produced an album called Arthur the King about a Dark Ages King Arthur, which perfectly fits with the setting for my books. I immediately ordered it, and am looking forward to listening to this new undercover soundtrack as I write the remaining three books in my Pendragon series: Lance of Truth, Crown of Dreams and Grail of Stars.

Clannad have already helped inspire the plot of Book 2 with their album Magical Ring, and I have a feeling I’ll be listening to quite a lot of spiritual music for the final book, so if anyone can recommend a soundtrack to help Rhianna on the final stage of her quest for the Grail, I’d love to hear from you!

Katherine Roberts won the Branford Boase Award for her first children’s novel Song Quest (reissued in paperback by Catnip Books). She is the author of the Seven Fabulous Wonders series, translated into 11 languages worldwide and now available as ebooks for Kindle and the Alexander the Great novel I am the Great Horse.  Her new children’s fantasy series about King Arthur’s daughter Rhianna Pendragon is published by Templar with the first book Sword of Light now available in hardcover. Katherine’s website is at www.katherineroberts.co.uk and you can follow Rhianna Pendragon on Twitter at @PendragonGirl. And Katherine herself as @ReclusiveMuse