Posted by Roz Morris @Roz_Morris in Undercover Soundtrack on September 23, 2015

The Undercover Soundtrack is a regular series where I host a writer who uses music as part of their creative environment – perhaps to connect with a character, populate a mysterious place, or hold  a moment still to explore its depths. This week’s guest is psychological thriller author AJ Waines @AJWaines

Music has always played a key role in my life; I started playing the piano at five (before I could reach the pedals) and the cello at nine. On a professional and recreational basis I’ve played in all of the main London concert halls; for the Queen and also for the Prime Minister at Whitehall. But it’s not just classical; my taste ranges from the early Baroque composer Allegri, through Shostakovich to the Pet Shop Boys.

As it happens, I turned to my music training to help me to learn how to write fiction and set about looking at a psychological thriller like a piece of music. It’s not hard to see instant parallels between music and writing; structure, voice, texture, layering, strands brought to the fore at any one point and strands kept simmering away in the background – they are all essential to both. Now as a writer, I tend to tune into elements such as the flow of phrases and placing of punctuation. Sentences, the building blocks of writing, have their own rhythm – you can have clunky sentences and well-paced ones. The words can suddenly stop. Start again. They can draw attention to themselves, be deliberately clunky and rough around the edges or be smooth and mellifluous. Just like music.

My father died while I was writing my third novel, Dark Place To Hide, and I found myself listening to certain soulful pieces of music that had a direct influence on the core moods in the story. Dark Place to Hide is all about secrets and betrayal entwined around two disappearances in one village. The perfect inspiration behind the first chapters, which focus on loss and confusion, came from an episode of the TV series Wallender, The Opening, by Ane Brun.

This sublime song helped to crystallise sections such as this:

The song is about trying to move forward when you find yourself utterly stuck; exactly the position Harper finds himself in when his wife not only has a miscarriage (after he’s just found out he’s infertile), but then goes missing. The police have no evidence and they can only conclude that she has taken off with her lover. ‘Sometimes it’s just a small step or a short conversation – or sometimes just a single word,’ Brun the composer explains, ‘that can set off the necessary process of change.’ This is particularly resonant for Harper. Having sunk into despair, it takes a missing child from the same village to shake him out of his torpor and spark his unique criminology skills into life.

Another song, Mysteries of Love by Angelo Badalamenti (featured in David Lynch’s 1986 film, Blue Velvet) gave me an emotional source for exploring Harper’s relationship with his wife, Diane. David Lynch, the director of the film, apparently asked for a soundtrack that was beautiful and dark ‘and a little bit scary’. Because Diane goes missing right at the start, it means we see their relationship largely through Harper’s eyes in the form of flashbacks and back story. His assumption is that their relationship is built on a solid foundation of trust and deep connection, but he feels betrayed, thrown into disarray and suspicion – the music here, like the film, provoked the bewildered feelings I wanted to convey of love that’s become tainted, unsettled and impure.

Eli’s Theme from the Swedish film Let the Right One In, by Johan Söderqvist, was exactly the right feel for the point in the novel when Clara, the plucky but vulnerable little girl disappears. The grief in the music also reflects Eli’s sense (in the film) of being forever an outsider and while Eli is a little older than Clara, I wanted to convey the same experience of ‘being a bit different’. Hopefully, I’ve portrayed Clara as a quirky little girl, climbing into places she shouldn’t go, because she’s exploring her world without the usual parental boundaries. The music reminds me of Mahler and pulls at the heartstrings, just right for taking me into the emotional world of Clara’s mother, who is dying and unable to search for her daughter, herself. 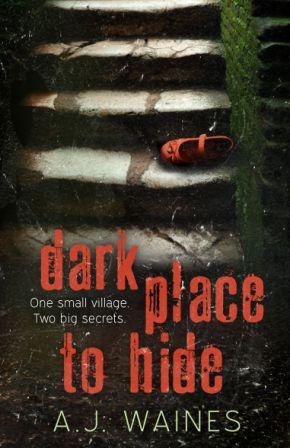 When the real chase kicks in, Harper tries to work out the meaning behind the fairy-tales into which Clara retreated before she went missing – then discovers there’s a connection between Clara and his wife. Between long stints at the writing desk, I listened to music that stoked up the emotions surrounding hope, striving and enlightenment. I was looking for a relentless tone and came up with Elgar’s orchestral arrangement of Bach’s Fantasia and Fugue in C minor BWV 537, which combines a driving pulse with melancholy. The fugue explodes with layers and threads that intertwine and overlap with a growing sense of urgency, which I hope is reflected in the book.

I don’t want to give away the ending of the novel, but Footsteps by the Pet Shop Boys hits the spot.

AJ Waines was a psychotherapist for 15 years, during which time she worked with ex-offenders from high-security institutions, giving her a rare insight into abnormal psychology. She is now a full-time novelist and has publishing deals in France and Germany (Random House). Both her debut novels, The Evil Beneath and Girl on a Train have been number one in Murder and Psychological Thrillers in the UK Kindle charts. In 2015, she was ranked in the Top 100 UK authors on Amazon KDP. Her new psychological thriller, Dark Place to Hide, was released in July 2015. Alison lives in Southampton, UK, with her husband. Visit her website and blog, or follow her on Twitter as @AJWaines and Facebook.

‘Even the bed is forgetting you’ – AJ Waines

Posted by Roz Morris @Roz_Morris in Undercover Soundtrack on September 22, 2015

My guest this week is the author of Girl on a Train. No, another girl, another train. I first came across her work when she wrote very entertainingly about how her psychological thriller had been mistaken by readers for the much-hyped title by Paula Hawkins. And they were happy to have found her, for she gained many new fans. I then discovered she used to be a musician, and has played in all the major London concert halls, so I had to enquire whether music played a role in her writing. It certainly does – she has written a haunting, thoughtful post about the music that helped her layer her work with complexity, loss and betrayal, especially movie soundtracks like Blue Velvet and Let The Right One In. She is AJ Waines and she’ll be here on Wednesday with her Undercover Soundtrack.