Posted by Roz Morris @Roz_Morris in Undercover Soundtrack on August 7, 2013

‘A scandal in a small place’

Once a week I host a writer who uses music as part of their creative environment – perhaps to connect with a character, populate a mysterious place, or hold  a moment still to explore its depths. This week’s post is by award-winning novelist Isabel Ashdown @IsabelAshdown

When I write, there must be no sounds other than the distant purr of traffic and birdsong, and the tap of my fingers on the keyboard.  But between the moments of physical writing, music plays a strong role in the development of my fictional worlds, and it provides me with a therapeutic contrast to the long hours of quiet and solitary creation.

My work is always borne out of obsession – a growing fascination with certain ideas, images and themes that will haunt me independently until the strongest of them converge to form the basis of my novel.  At the early stages of Summer of ’76, I discovered these things: it was a story about a scandal in a small place, set on the Isle of Wight in the heatwave summer of that year, and my protagonist was a 17-year-old boy called Luke.  From the outset, David Bowie’s Young Americans played a constant loop through my mind, with its sense of optimistic yearning and sunny, sad lyrics.  Out in my car, driving towards my post-writing dog walks, I’d play the track, recalling the thrill of discovering the second-hand album when I was myself a teenager.

In Summer of ’76, the weather is arguably a character in its own right.  Images and senses of summer play a strong role, and as the drama of the island scandal intensifies and escalates, so too does the temperature.  My own memories of heat-baked lawns, the rise and fall of honeysuckle and the slip-slap of flip-flops on boiled asphalt seemed to draw me to particular soundtracks – those that reflected gentle summers beneath a clear blue sky, and those reminiscent of a fractious, broiling season where tempers fray and secrets spill over.  Nick Drake’s Saturday Sun was a favourite I’d habitually play over weekend morning coffee, and one whose lyrics felt strangely apt.  In stark contrast, Brian Eno’s Baby’s on Fire, an old favourite of mine, has that frenetic, out of control atmosphere that seems to go on without end, not unlike like that ceaseless summer of 1976.  Hearing these tracks could transport me into Luke’s world, and often I’d play them to kickstart the writing where I last left off.

The year 1976 holds great interest for me, not only because of that extraordinary weather.  Across the country, it was a time of struggle and social change, of unemployment, high inflation and striking workers.  But it was also a time of great opportunity.  Home ownership was the new aspiration, and holidays abroad something within the realms of possibility.  Feminism gained momentum, the punk movement made headlines, and in a period of unprecedented sexual liberation, it seemed anything was possible.  Many would have us believe that the 70s was all Abba and Roussos and Brotherhood of Man.  But of course the pop of an age can only tell us the surface story – and isn’t it what’s beneath the surface that interests us writers more than anything?  Whilst punk was only just hitting the headlines, its electricity could already be felt fizzing in the ether.  For me, for Luke’s burgeoning desire for escape, the track I frequently turned to was London Calling by The Clash, from the album of the same name, and one that’s never far from the top of my playlist. 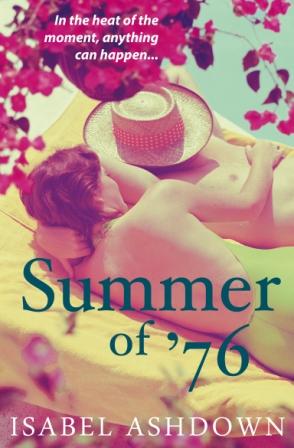 Luke’s summer is bubbling with conflict.  He’s ever hopeful about reinventing himself in the wider world, with its promises of freedom, sex and adventure; yet revelations about his parents’ personal lives cause him to question everything he thought he knew.   This conflict of adolescence is something that excites me greatly in writing – and I’m drawn to music which does the same.  Perhaps it’s where the music does one thing, yet the lyrics do something else, or where the track is at once uplifting and melancholy.  During this writing phase, I discovered a remarkable mashup online: Lana Del Rey vs The Smiths – This Charming Video Game.  I was a big Smiths fan in my teen years, and the blend of these two tracks – and their videos – seemed perfectly heartbreaking, representing to me everything that is tough about growing up, about coming of age.

Isabel Ashdown is the author of three novels published by Myriad Editions: Glasshopper (London Evening Standard and Observer Best Books of the Year 2009) Hurry Up and Wait (Amazon Top Customer Reads 2011), Summer of ’76, and winner of the Mail on Sunday Novel Competition 2008. In 2013, her essay on the subject of ‘voice’ will feature in Writing a First Novel, edited by Karen Stevens, in which novelists, agents and publishers discuss the joys and challenges of writing a first novel (Palgrave MacMillan). Isabel writes from her West Sussex home which she shares with her husband, a carpenter, their two children, and a border terrier called Charlie.  Find out more about her at www.isabelashdown.com or chat to her on facebook and twitter.

Posted by Roz Morris @Roz_Morris in Undercover Soundtrack on August 5, 2013

The heatwave may have lifted for now, but it burns on in this week’s post – the soundtrack behind a story about a scandal on the Isle of Wight in 1976. Its author says her novels grow from ideas that take root and become obsessions – a process I recognise very well, as my own novels start that way. Alongside the ideas were key pieces of music – David Bowie for optimistic yearning, Nick Drake for wistfulness and Brian Eno for the unexpected and threatening. She is Isabel Ashdown and she’ll be here on Wednesday with her Undercover Soundtrack.