Posted by Roz Morris @Roz_Morris in Undercover Soundtrack on May 9, 2012

‘Two pieces of music; two essential sides of the human self’

Once a week I host a writer who uses music as part of their creative process – perhaps to tap into a character, populate a mysterious place, or explore the depths in a pivotal moment. This week’s post is by author, games designer and graphic novelist Dave Morris @MirabilisDave

On ‘a dreary night of November’, with rain pattering dismally against the panes, the creature animated by Victor Frankenstein draws his first breath. His senses are a confused storm of inputs and feelings. Sounds have colour. Shapes have taste. Gradually he makes sense of the world, marvelling at the mystery of birdsong and the immense round mountain that rolls across the sky at night.

Music as the vanishing point

Last month I published a new version of Frankenstein: a digital, interactive retelling of the story, the purpose of which is to rescue Mary Shelley’s classic from the neglect into which it has fallen. It’s a great story, but one mired in swathes of schoolbookish prose. My aim in making it interactive has been to turn it up to eleven, to reach out and drag the modern reader right into the text. That opening scene of the creature’s birth gave me the clue for one way to do that – a way to show his awakening consciousness using all of the senses. And that led me towards music as the vanishing point where his raw sense of hearing converges with his aspirations to join the communality of art and culture that unites the rest of humankind.

Spurned by his maker and rejected violently by everyone he meets, the creature takes shelter in an outbuilding adjoining the chateau of an aristocratic family, the de Lacys. Here’s where Mary Shelley, not always too concerned with crafting tidy plotlines, came up with an inspired story device: a crack in the wall through which the creature is able to spy on them. He observes the de Lacys at the dinner table, or gathered around the elderly, blind pater familias as he plays the harpsichord. When a Turkish girl comes to stay, the son of the family starts to teach her French and, eye pressed to the crack, that’s how the creature gets his education too.

It’s at this point in the novel that we start to perceive, buried in its grosser body tissue, the outlines of another familiar story: the former ingenue who, as he acquires education and culture, becomes increasingly dismissive of those who remind him of his former ignorance. ‘Her grasp of French is almost as good as mine,’ remarks the creature of Safiye, the Turkish girl, in a backhanded compliment. When a bullying official of the Revolutionary government shows up to evict the family, the detail that causes the creature greatest outrage is that the man is unable to read.

Finally the creature feels that his efforts at self-education have earned him a place by the hearth. He is ready to creep out of his ruined hovel and go round to the front door. Dressed in stolen clothes, he waits till the others are out to present himself to old Monsieur de Lacy, whom he expects to be the most sympathetic to his plight:

Alone in the cottage, the old man sits at his keyboard playing the opening contrapunctus of Bach’s Die Kunst der Fuge.  It is a sweet sad air, mournful and yet gloriously so. Though Bach intended this piece of music as just an exercise, everything human is contained there. We live and will die. Nothing has meaning except what we give it. And yet the tiny equations of mortal perception contain everything that is beautiful and true. 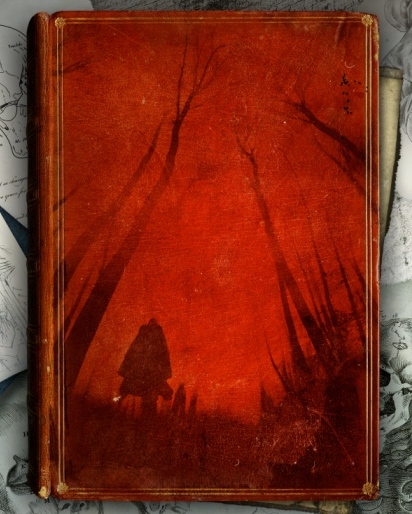 Now, Mary Shelley doesn’t do a whole lot of showing. ‘He played several mournful but sweet airs,’ is how she renders this scene, ‘more mournful and sweet than I had ever heard him play before.’ But in my reworking of the novel I wanted the reader to see how the creature has changed over these months – from a thing whose senses run together in a synaesthetic whirlpool to a man who can quote Plutarch and Milton. And that piece by Bach, played here by Margaret Fabrizio, is surely the epitome of humanity in its melding of simplicity and beauty, logic and a sense of the spiritual.

But it’s not enough to show your character has become almost a gentleman. You must remind the reader where he came from. A few minutes later, talking to M de Lacy, the monster asks him to play something:

Turning back to the harpsichord, he lets his fingers find the keys and then bursts into a performance of Rameau’s Tambourin. It is of a very different mood from the Bach he was playing before I came in: a fast-paced work full of gusto and melodramatic flourishes. A mere entertainment. How disappointing that he doesn’t recognize a kindred spirit.

The creature’s scornful reaction to what is, after all, a jaunty bit of 18th century pop (played here with great verve by Julian Frey) is more than just resentment at being thought unsophisticated. It shows us his fatal flaw. Sheltered in his hovel beside the chateau, all that he has seen through the crack is the best and most serious side of mankind. The aristocratic M de Lacy is wise enough to appreciate that there is room in life for both the transcendent brilliance of Bach and the heel-kicking silliness of Rameau. The creature fails to understand that. His morality is as pure and absolute as an adolescent’s, as furious as those French revolutionary fanatics’. And in the gap between these two pieces of music, these two essential but opposite sides of the human self, he will e

Dave Morris is the author of the graphic novel series Mirabilis: Year of Wonders, originally serialised in Random House’s comic The DFC. His interactive retelling of Frankenstein is published by Profile Books. Dave has two blogs: Mirabilis and Fabled Lands, and you can follow him on Twitter: @MirabilisDave