Posted by Roz Morris @Roz_Morris in Undercover Soundtrack on April 24, 2013

‘For a month, I listened to music to hear my characters’

Once a week I host a writer who uses music as part of their creative process – perhaps to tap into a character, populate a mysterious place, or explore the depths in a pivotal moment. This week’s post is by award-winning literary fiction writer Andrew Blackman @BlackmanAndrew

I’d written a manuscript of 100,000 words, sent it to my agent, and was feeling good. I met him at a pub in Camden, ordered a pint of Guinness, and sat on a bench outside in the watery spring sunshine, expecting a conversation about how large my advance would be.

When I got home, I did what every writer does after receiving helpful, constructive criticism: I took it as an attack on my ability as a writer, went to bed and turned off the lights and felt like never getting up again. The manuscript I’d been so proud of that morning now seemed to me like worthless junk, a waste of two years of my life. It’s lucky I’d made multiple digital copies, otherwise I’d have burnt the thing.

Changing the voice of all seven different narrators is no simple task. It’s easier to write new scenes or even a new ending. Changing narrative voice means going through every line of the novel and rewriting it. But first it means defining what the different voices are going to be. As I’ve done many times before when in need of inspiration, I turned to music.

I created a different mood for each character, based on my idea of who that person was. The Beethoven and Sibelius I’d listened to while writing my first draft was fine for Granddad, but not for young, idealistic Marie from California. She listened to Laura Marling, Joanna Newsom and Birds of Chicago. As for Jon, the furniture salesman, he was an Arctic Monkeys man. I listened, and I tried to hear their voices in my head. I did this for all seven characters. For a month I didn’t write a thing. I just spent time with my characters, listening to the music they liked and trying to hear them speak the sentences I’d written.

Doing this helped me see just how much my agent was right. My 20-something furniture salesman referred to a smelly minicab as being ‘like a full-bodied wine, releasing more varied and subtle aromas with more time and attention’. With classical music playing, that had actually sounded OK. With the Arctic Monkeys blasting out, I realised just how ridiculous it was. I changed it to:

Another click and we were locked in. Hot and clammy suddenly, choking on nicotine and pine … At a red light, the fizz of a can, loud slurping, the metallic stench of Red Bull. Behind it all, a strange, burnt aroma… 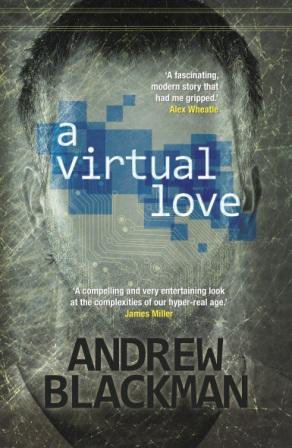 I did the same with every character, line by line, word by word. I changed the vocabulary, I changed the cultural references, I changed the rhythm of the sentences. Jon, with his guitar-charged indie rock, spoke in a choppy, broken English, while Marie with her contemporary folk was more florid, elegant and occasionally long-winded.

By the end, I couldn’t tell whether I was choosing music to fit the character, or whether the character was being shaped by the music. And the best part was that it didn’t matter. I was listening and writing in different voices. I ended up with 29 chapters written by seven different characters, and there’s nothing in the chapter title to indicate who the narrator is. The voices are, I hope, so distinctive that you can tell within a few sentences who you’re listening to. It’s only possible because of the time I spent with my characters, listening to their music and letting their voices enter my head.

Andrew Blackman‘s second novel A Virtual Love is in bookshops now. His debut novel On the Holloway Road (Legend Press, 2009) won the Luke Bitmead Writer’s Bursary and was shortlisted for the Dundee International Book Prize. He’s a former Wall Street Journal staff writer, now converted to fiction. More information available at his website, or you can connect with him via Twitter.

GIVEAWAY Andrew is offering a signed copy of A Virtual Love. For a chance to win, leave a comment here or share this post on Twitter, Facebook, G+ or anywhere else (and don’t forget to leave a note here saying where you shared it).

Posted by Roz Morris @Roz_Morris in Undercover Soundtrack on April 23, 2013

Another Soundtracker returns this week, another book under his belt. Andrew Blackman had set himself a steep challenge with his second novel. His story of love in the internet age had seven narrators, each needing their own voice and style. Early feedback from his agent said they weren’t distinct enough, and for a while, Andrew despaired of finding a solution. Then, as he always did in times of trouble, he turned to music. Which saved the day. He’ll be here on Wednesday with the Undercover Soundtrack to his second novel, A Virtual Love.