Posted by Roz Morris @Roz_Morris in Undercover Soundtrack on February 5, 2014

‘I write about love and hope’

Once a week I host a writer who uses music as part of their creative environment – perhaps to connect with a character, populate a mysterious place, or hold  a moment still to explore its depths. This week my guest is urban fantasy author Kim Cleary @KimClearyWriter

I love jazz, rock and soulful ballads. I enjoy a scratchy recording of Billie Holiday singing Fine and Mellow, as much as a glossy Youtube of Linkin Park performing From the Inside.

Music is an essential component of my creative environment, but I prefer to write in silence, or in such a busy place it’s easy to shut out the noise. I find myself listening to the story in the music rather than the story in my head and it’s too easy to get distracted.

In preparation for this post for Roz Morris’s marvellous blog, I’ve thought about the music that sustained me while I wrote, and rewrote, my debut novel Path Unchosen. Remembering the music has helped me to relive the writing of the book. It’s written in the first person so I often found myself falling into the head of my 18-year-old heroine. When Judy first discovers she’s a necromancer she wants to deny who she is.

Playing the music again has brought back so many emotions. The sense of awe as Judy discovers what she can do. The fear of losing everything she’s gained. The pain of an intimate betrayal. Music reaches into my soul, finds the memories I’ve hidden away, and yanks the emotions to the surface.

I write about love and hope, so it’s no surprise most of the music that has affected my writing is about finding or losing love! In Path Unchosen, I write about the love between a daughter and a father; between friends as close as sisters; the naïve love between a student and her teacher; the first stirrings of desire; and a deep compassion for all creatures that feel pain, hope, and fear. Love and hope.

Sometimes I hear a snatch of lyrics and a scene immediately starts playing in my head. From Otherside, by the Red Hot Chilli Peppers I knew Judy would face the chilling realisation that she can’t go back, she can’t stop being a necromancer. I saw the scene play out between Judy and her spirit guide, in a forest dulled grey and soundless.

With Joni Mitchell’s A Case of You, the mesmerising chorus triggered not just one scene, but the whole bitter and sweet relationship between Judy and her father. We played the song at my own father’s funeral not many years ago. Perhaps you won’t be surprised to hear that Judy finds the spirit of her father in a workshop and smithy not unlike my father’s.

Leonard Cohen sings Anthem like a man who has been on his knees in despair. Judy despairs too, but she never gives up hope. Not even in a specially created dark, cold, and silent prison, designed to cut her off from the dead who sustain her.

At other times, I use music to trigger emotion to get into Judy’s head. Linkin Park’s From the Inside is a powerful way to stir emotions of lost love and betrayal, especially when sung very loud in an empty house. 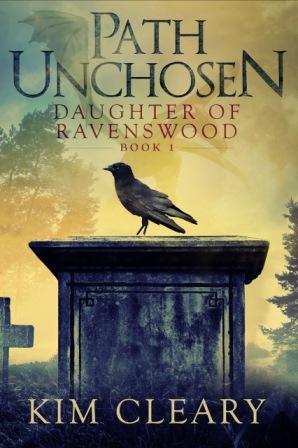 When I am very lucky, sometimes while listening to my favourite music, I become Judy. I dance my way across the soundtrack to her life, and ideas for the scene percolate like notes from a symphony. I fight for my life to pounding rock music like Chicgao’s 25 or 6 to 4, Deep Purple’s Black Night, The Red Hot Chili Peppers By the Way, and anything by Led Zeppelin!

I had to stop writing this blog post to sing along to the Choir of Hard Knocks’s version of Leonard Cohen’s Hallelujah. The arrangement showcases untrained voices, marred by poverty, substance abuse and illness. I was lucky enough to see them perform live and stood with everyone else in an ovation of several minutes. It was as if strength, integrity and hope, somehow transferred themselves from the singers to the audience. Just like it does in the best stories. The ones we love to read, and hope to write.

Kim Cleary grew up in Birmingham, UK, studied medieval history and psychology at Adelaide University in South Australia and has worked all over Australia and in London. She now lives with her husband and a cocker spaniel in Melbourne, Australia. Find her on Facebook, Twitter (@KimClearyWriter), her blog and Amazon.

‘I write about love and hope’ – Kim Cleary

Posted by Roz Morris @Roz_Morris in Undercover Soundtrack on February 3, 2014

My guest this week says she writes about love and hope – and that her writing is in thrall to songs about finding or losing love. She describes her novels as urban fantasy for anyone who longs to discover they are extraordinary, and her musical companions are a soulful, heartfelt ensemble – Joni Mitchell, Red Hot Chili Peppers and Leonard Cohen. She is Kim Cleary, she has published her first novel Path Unchosen, and she’ll be here on Wednesday with her Undercover Soundtrack.