Posted by Roz Morris @Roz_Morris in Undercover Soundtrack on October 24, 2012

‘Music to depict lunatics in love’

Once a week I host a writer who uses music as part of their creative process – perhaps to open a secret channel to understand a character, populate a mysterious place, or explore the depths in a pivotal moment. This week’s guest is Ruby Barnes @Ruby_Barnes

I listen to music for its mood-influencing properties. Being partially deaf, it’s sometimes difficult to hear lyrics clearly but the cadence and key modify my state of mind and the tone of my writing. In the case of The Baptist, a psychological thriller, it was a mixture of the sublime (Melody Gardot’s My One and Only Thrill ) and the ridiculous (Nick Cave’s Murder Ballads)  that led me through the plotting maze of dual serial killers.

John Baptist is motivated by his religious mania. He recognises the devil’s emissaries by their red halo and his method of murder involves drowning. His partner in crime, both in the asylum and later on the loose in rural Ireland, is Mary and her alter-ego Alice. Mary / Alice is just plain bonkers. Being a pantser when it comes to plotting and planning, I had a general storyline in my mind but was struggling with two aspects of the story; how could I differentiate this latter day Bonnie and Clyde from each other, and how best to depict lunatics in love?

My writer’s office was the train, three hours a day in a crowded carriage. I used ear buds to cut out the ambient disturbance and listen to mood music. I could even decipher the lyrics by programming the graphic equaliser on my Walkman. Where the Wild Roses Grow was my mental image for John’s style of murder; he drowns his brother in a bathtub within the first chapter. It’s a cheesy video with tiny Kylie Minogue and the astoundingly ugly Nick Cave, but a caring and thoughtful murder, if you will. Everything makes sense to John as he cleanses a path for the second coming.

The Murder Ballads album had long been a favourite and I began to realise there were two distinct styles of song on the album; controlled and sinister versus frenzied. The former were murderers still on the loose and the latter were doomed to capture. So it came to me that John would survive to serve his higher purpose and Mary / Alice would display all the self-destructive craziness of Lottie in The Curse of Millhaven.  The juvenile serial killer of that song was firmly in my mind as Alice despatched Charles with a sword, the herd of sheep with an axe and attacked a family with her antique dagger. She was the female embodiment of Stagger Lee.  In contrast, John moved on from his first drowning (for which he was committed to the asylum) to more controlled and undetectable murders. Richard Slade from The Kindness of Strangers was the type of subtly persuasive and calculating killer John became.

But what of love? At times on the train the Murder Ballads became too much, especially if I was mumbling along to the parental advisory lyrics of Stagger Lee and getting dagger looks from the other passengers. I needed to chill, to zone out, and so did John and Alice. Melody Gardot’s My One and Only Thrill was the perfect panacea. Then, one evening at home, the title track was playing just before the kids’ bedtime and my five-year-old came into the room to complain that those minor strings wrapped around the sweet lyrics were ‘scary music’ and gave him nightmares. It was a perfect analogy for loony Alice’s passionate and obsessive love for John. 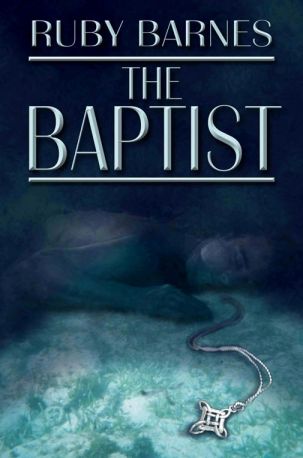 My One and Only Thrill became the mainstay for The Baptist from then on. Our Love is Easy was the anthem for their sojourn out west. There were breakthroughs of Nick Cave again as the couple’s undulating madness coincided and peaked; they pushed the obnoxious fat tourists off the Cliffs of Moher while I listened to the mammoth O’Malley’s Bar.

Back in their manor house stacked with victims’ bodies, Alice’s attack on John with a sword while high on drugs made him realise it was always only just a little game to her (Melody Gardot’s Baby I’m a Fool).  John started to disengage from their relationship and the novel moved towards its climax.

Some authors prefer a silent environment for creativity. Me, I’m researching just what sort of musical craziness I need to guide me safely through the sequel to The Baptist.

Ruby Barnes has lived in the Shires, Scotland, Wales, Ireland and the Swiss Alps. He writes about misfits, rogues and psychopaths in novels called Peril, The Baptist, The Crucible and other works. His writing is dedicated to the memory of his late grandfather Robert ‘Ruby’ Barnes.  Find him on Twitter @Ruby_Barnes and on his blog.

GIVEAWAY! Ruby is excited to give away one ebook copy of The Baptist to a commenter on this post. Scribble him a note for a chance to win.