Posted by Roz Morris @Roz_Morris in Undercover Soundtrack on February 14, 2017

The Undercover Soundtrack is a series where I host a writer who uses music as part of their creative environment – perhaps to connect with a character, populate a mysterious place, or hold a moment still to explore its depths. This week my guest is award-winning historical fiction and contemporary romantic novelist Nicole Evelina @nicoleevelina

Every one of my books has a theme song/album – music without which the book never would have been written.

Capturing the essence of a legend

The theme song to the Guinevere’s Tale trilogy is “ Thousand Years by Sting. This song came out just weeks after I began writing Daughter of Destiny, the first book in the series. There is something about the cyclical sound of the melody that calls to mind reincarnation, the thousands of versions and re-tellings Arthurian legend has gone through over the ages. It also evokes to me the changing nature of the characters as artists reinvent them to fit their time.  In the prologue to the book, Guinevere explains that not a single version you’ve heard has been right; she is going to set the record straight in the trilogy by telling the true story of her life. In so doing she can reclaim her name and her dignity from years of slander and abuse.

Plunging into the mind of a killer

The sequel, Camelot’s Queen, has one of the longest playlists of any of my books, most songs aligning with or inspiriting certain scenes. But the most influential album was the soundtrack to the movie Red Riding Hood, specifically the songs by Fever Ray, The Wolf and Keep the Streets Empty for Me. I listened to that soundtrack over and over while I wrote the section of the book dealing with Guinevere’s kidnapping by Malegant – one of the most detailed and longest parts of the book, and also my favorite. There is something feral about this music – wild, dangerous and dark – that fit perfectly with evil in Malegant’s soul. For Guinevere, the experience was the ultimate nightmare, not just for any woman, but especially for a priestess and queen. By his vile actions, Malegant stripped her of her power and her dignity, and unknowingly changed the course of her life – and that of all of Camelot. Scenes of such dark subject matter and import need equally powerful music. It doesn’t hurt that these songs could well have been used for a Samhain ritual, the event during which Guinevere’s torment begins.

Longing for an unknown love

My contemporary romantic comedy, Been Searching for You, actually came about because of a song. In November 2012, my best friend introduced me to the song To Whom it May Concern by The Civil Wars. Knowing I’m a die-hard romantic still looking for my soul mate, she thought I’d be able to relate to the lyrics about missing and waiting for someone you’ve never met, but you are certain is out there. Oh boy, did I. That song is actually why Annabeth writes letters to her soul mate on her birthday each year in the book.

As I got to know more of The Civil Wars’ music, I fell in love with a second song, Dust to Dust. It feels to me very much like a bookend to To Whom it May Concern. To me, it’s the song for when the two lovers who hadn’t met yet in To Whom It May Concern have gotten together, overcome their struggles and realised they finally found one another. So I challenged myself to write a story that began with the words ‘To whom it may concern’ and ended with the words ‘dust to dust’. That book is Been Searching for You.

Not many people would put a metal song and a feministic manifesto at the top of their influences for writing biographical historical fiction about the first woman to run for President in the United States in 1872 – but I think we’ve already established I’m not normal. In the End by Black Veil Brides is my song explaining the urgency I felt to write Madame Presidentess, the story of Victoria Woodhull, a nearly forgotten, but crucial, figure of the American suffrage movement. There’s a line that asks who will tell the story of a person’s life. I was that person for Victoria. I also loved the theme of not being afraid to die and leaving something behind for future generations, both of which Victoria would very much be in agreement with. As a spiritualist, for her death and life were one, and I have a feeling she’s still not done doing her work here on earth – or at least not until her name is in the history books where it belongs. 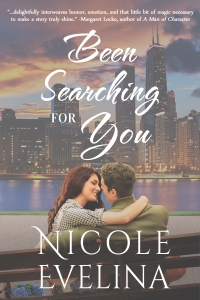 Victoria’s theme song is Woman (Oh Mama) by Joy Williams (formerly of The Civil Wars). It chronicles woman’s roles throughout history – caregiver, life bringer, helpmeet and victim – how she has been seen by men – from Madonna to whore and back again – and the identities she has reclaimed to be her own – goddess and fabric of the universe. Victoria was a very strong woman, who by her own admission was years beyond her time, so I know she would proudly sing this song and declare herself strong and free.

Nicole Evelina is a multi-award winning historical fiction and contemporary romantic comedy author from St. Louis, Missouri. Her debut novel, Daughter of Destiny, was named Book of the Year by Chanticleer reviews. She’s now at work on her first non-fiction book, tracing the evolution of Guinevere over the last 1,000 years of literature, and is also finishing the final book in her Guinevere’s Tale trilogy, Mistress of Legend, which will be published later this year. Learn more about her at nicoleevelina.com or follow her on Twitter, Facebook, Instagram or Pinterest.

Posted by Roz Morris @Roz_Morris in Undercover Soundtrack on February 13, 2017

I had a hard time this week picking just one pull quote to represent my guest’s work. She’s a writer of two halves – historical romantic fiction and contemporary romance. And she’s now also venturing into biographical historical fiction as well. The common thread is always music. A song by Sting that evoked for her a sense of an untold angle for the Arthurian legend. Or a friend who recommended music by The Civil Wars that gave her the opening and closing lines of a modern romance. What could be more fitting with Valentine’s just around the corner? Drop by tomorrow for the Undercover Soundtrack of Nicole Evelina.

Posted by Roz Morris @Roz_Morris in Uncategorized on December 7, 2011

The Undercover Soundtrack is a weekly series by writers who use music as part of their creative process – special pieces that have revealed a character to them, or populated a mysterious place, or enlarged a pivotal moment. This week’s post is by prolific YA novelist Nicola Morgan @nicolamorgan

Music and I have an odd relationship. If I say “There was no music in my life until I was eleven”, you’ll think I’m being melodramatic or metaphorical. No. My extremely unusual childhood was full of amazing freedoms, but no music. Or rather, we didn’t listen to it at home, ever, and since home was school, I didn’t listen to it at all. There was a school choir and I sang in it, but that, being for chapel, was somewhat narrow in its tastes. Anyway, it wasn’t till I went to boarding-school that music appeared, and by then I lacked the musical parts of my brain. (Confirmed when I tried to learn the oboe as an adult.)

Yet, if I’m writing fiction, there must be music. And I’m pedantic about the choice. It has to be just right for that piece of writing. Once I find the album, I play it over and over. And over. Sometimes I have to play it through headphones because my family shout, “NOOOO!”

A kick in the heart

It’s not background music. It’s not just to block out the real world – though it must do this, too. But it must be more invasive. It needs to kick me in the heart, make me sing – sometimes literally. It needs to take me to a place where fiction dwells and worlds can be created.

What music? The word my family use to describe the music I write fiction to is “anthemic”. They will suggest a new band or album and say to me, “You could write to that.” It must have powerful melody, rhythm and emotion, in both the music and the words. And there must be words. I think as well there must be colour. And music with colour – an aspect of synaesthesia – is something that’s hugely a theme of Mondays are Red.

Losing my religion – in yellow

So, exactly what is on my Undercover Soundtrack? When I was writing The Passionflower Massacre (Hodder, 2005) it was R.E.M., mostly Around the Sun, though in fact I quite wanted to call the book Losing My Religion. R.E.M.’s music is rich and golden, warm and vibrant, mysterious and with odd meaning. And The Passionflower Massacre is a book like that. I think the book is more yellow, more summery than R.E.M., though, but the Around the Sun track is perfect.

Sleepwalking (Hodder 2004) was Sting. Sting and the Police are cold, thin blue, the wail of a heartless future. That’s how Sleepwalking feels to me. The Highwayman’s Footsteps (Walker 2007) was Franz Ferdinand, rich with reds and blues and excitement;  The Highwayman’s Curse (2008) was Franz Ferdinand again and The Kaiser Chiefs, harsh, cruel, jangly, angry, steel grey and blood red with the horror of religious hatred.

Wasted was a strange mixture: Belle and Sebastian, Muse (Uprising – love it!) and Beautiful South. With smatterings of REM again. It’s not a violent book, more thoughtful, and if it had a colour it would be an impossible blue lilac disappearing at all its edges. (For your interest, the main character is a girl with music-colour synaesthesia.)

Everything I want for a dark book

And the novel I’ve just finished, Brutal Eyes, is pure Coldplay – mostly Viva la Vida but with the recent revisions written to Mylo Xyloto, especially the phenomenal Us Against the World and Every Teardrop is a Waterfall. Those two songs are everything I want in music for a dark book. You can hear every rasp of Chris Martin’s breath, every squeak of finger on string. You can

hear his eyes close, his shoulders move. It has enormous emotional heart. I’d like to hope it lends some of that to the book. Funnily, Brutal Eyes doesn’t have a colour for me.

What did I write Write to be Published to? Nothing! I couldn’t possibly write non-fiction while listening to music!

Nicola Morgan is an award-winning author, with around 90 published titles, and a growing list of self-published titles. She is well-known to aspiring writers for the honest advice on her blog, Help! I Need a Publisher! and a book – Write to be Published – published by Snowbooks. Notable works include her famously gruesome novel Fleshmarket; the Aventis shortlisted Blame My Brain: The Amazing Teenage Brain Revealed; and Wasted, which was longlisted for the Carnegie Medal and won or was shortlisted for many awards. Mondays are Red was originally published in 2002 and Nicola has now created a new edition for ebook format, including some extra material such as creative writing by school pupils. This time, she is publishing it herself, with the help of her agent. Follow her on Twitter @nicolamorgan