Posted by Roz Morris @Roz_Morris in Undercover Soundtrack on August 9, 2017

The Undercover Soundtrack is a series where I host a writer who uses music as part of their creative environment – perhaps to connect with a character, populate a mysterious place, or hold  a moment still to explore its depths. This week’s post is by NYT bestselling author Caroline Leavitt @leavittnovelist

My novel Cruel Beautiful World was written over a period of four years, with lots of tears, struggles, millions of pages, and I know for a fact, millions of songs. I admit that I listened to the same music over and over to get the emotional tone right. And I never could have silence when I wrote because the music both relaxed and inspired me.

You might think that because the novel is set in 1969 and 1970 that I listened to the period’s rock and roll back then—kind of dippy hits like Scott McKenzie’s  If You’re Going to San Francisco (Be Sure to Wear Some Flowers in Your Hair), but actually, I didn’t. Hey, I grew up in the 70s and I didn’t want my own experiences leaking too much into my narrative. I wanted my characters to claim their own lives and their own music. And I wanted to create their world for them.

Every day when I sat down to write, I would listen to The Smiths’ There Is A Light That Never Goes Out.  To me, the lyrics are so very ‘cruel beautiful world-ish’ on their own. The song is narrated by a man in pain. He knows that yes, there is this hope, this light, even as he’s thinking about what a privilege it would be if a truck ran over him and the person he loves – death by Mack Truck. It always got me in just the right mood.

Some days, writing snags and I need a beat to propel me through it.  Usually those songs have nothing to do with what I am writing, I just feel as if my heart is beating along with the musical beat. When I was writing the tortured, tangled relationships in the books, I listened to The Beatles Rubber Soul , that bright shiny sound, the beat that kept propelling me forward. I didn’t listen to the lyrics (if I had, I would have been derailed) but the music acted as a pulse.

When I had to write the most wrenching scene of my novel, where a death occurs, something I had put off for months, I had to be really tender with myself, but I also had to brace myself so I would go deep, so I wouldn’t pull back from what was important. That was when I listened to Those You’ve Known .  What makes this song more meaningful and heartbreaking for me was my actor son was in a production of Spring Awakening, and he sang that song as Moritz. I wept listening to that song when I saw him onstage, and I wept while I was writing, but I got the scene done exactly as I wanted it to be.

Better Be Home Soon by Crowded House captures the feeling, the longing my characters have for one another–and my own internal longing which never seems to ebb. Listening to this song is like taking a vitamin for my writing. Back to Black by Amy Winehouse does the same thing for me because of its bluesy, smoky sound.

While I was thinking of my work as a whole, trying to categorize this unwieldy novel, my son was sprawled on a chair in the living room, avidly listening to this gorgeous song and I said, ‘What’s that? Who’s that?’ He looked up at me. ‘Group Love,’ he said. ‘Cruel and Beautiful World.’  I knew immediately that without the ‘and’ it would be the perfect title because it’s sort of my world view. Yes, things fall apart, hearts rip open, but there is love, too, and beauty and art and fresh Insomnia cookies. 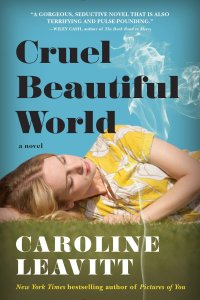 The day I finished my novel and sent it off to my agent, I cried. And then I put on Tom Jones’s Country album, because that was the one I played every day when I was pregnant with my son Max. I sang along to it, feeling soothed. I used to put my headphones on my belly so my son could listen in, too.

I knew I was birthing something.

Caroline Leavitt is the New York Times Bestselling Author of Pictures of You, Is This Tomorrow and the critically acclaimed Cruel Beautiful World, which launched in paperback on 8 August. She reviews books for the San Francisco Chronicle, the Boston Globe and People, and she teaches writing online at Stanford and UCLA Extension Writers Program, as well as private clients. She was a finalist in the Sundance Screenwriters Lab. She lives with her husband, the writer Jeff Tamarkin, in NYC’s unofficial sixth borough, Hoboken, near their actor son, who lives in Brooklyn. Right now, she’s listening to lots of Benny King. You can find her on her website, Twitter (@leavittnovelist), Facebook, Instagram (carolineleavitt) and Litsy (Carolineleavitt)