Posted by Roz Morris @Roz_Morris in Undercover Soundtrack on April 24, 2019

The Undercover Soundtrack is a series where I host a writer who uses music as part of their creative environment – perhaps to connect with a character, populate a mysterious place, or hold a moment still to explore its depths. This week my guest is returning for a third spin – Gwendolyn Womack @Gwen_Womack

Thank you Roz for having me back to the Undercover Soundtrack. I’m thrilled to delve in and discuss the music behind my new novel The Time Collector. The story is a romantic thriller about two psychometrists. Psychometrists are people who can touch objects and see the past embedded within them. The pair become caught up in trying to solve the mystery of out-of-

place artifacts (“ooparts”) that challenge the timeline of recorded history. Within the narrative, the story travels back in time periodically through the objects, and the answer to the ooparts’ riddle lies hidden within the fantastical world of crop circles, ancient crystals, and sacred geometry. The book has many aspects, so the music I listened to while writing was highly varied too.

The main character of the book, Roan West, is a master psychometrist who has been peering into the past since he was a boy. He wears gloves to control what he touches and the imprints he reads. The only time he takes his gloves off for long periods of time is when he mountain climbs. He is an avid boulderer, someone who climbs without gear or ropes, and bouldering has become his outlet where he can recharge. When I went on YouTube to research videos of climbers I found the climbers’ playlists to be so kinetic and full of energy. I ended up getting several albums and looping specific songs. They became Roan’s songs in my mind. The music I looped the most for Roan was from the album Emancipator by Doug Appling. I particularly loved the tracks Rattlesnakes, Nevergreen, and First Snow.

The other psychometrist and main character in the story, Melicent Tilpin, is just starting out on her journey to becoming a psychometrist. For Melicent, I ended up looping A Chorus of Storytellers’s Within Dreams and Perro for many of her scenes. There is something elusively wistful about both pieces that struck a chord when I was trying to write her.

There is one song in general that I listened to the most throughout writing the book. I first heard it on the internet as background music to a short video piece that Futurism.com was circulating and I loved it so much I researched what it was and how to get it. It’s a short piece of instrumental music called Stream by Sean Digo and I was able to download on Audiojungle. I looped it for countless hours (hundreds) and even now when I listen to it the song brings back so many memories of the writing.

Parts of The Time Collector journey back in time through memories stored within objects. There were pieces of music that helped me write those historical passages. For example, within an antique music box lies the memory of 1700s Vienna and musical prodigy Regina Strinasacchi, who performed with Mozart. There’s a wonderful bit of backstory about the sonata Mozart composed for her and I wrote their chapter playing the sonata.

For another object’s memory—hidden within the key to the astronomical clock tower in Prague in the 1400s—I listened to medieval music on YouTube. And another memory is imbedded within an exquisite Korean fan of a young girl’s life during the Korean War. The girl’s mother was a musician and I found traditional Korean music to help spark my imagination. The full playlist is on my website, but this one performer is how I imagined the mother to look in concert.

An important flashback of the story takes place in Australia and I found some fantastic Aboriginal Didgeridoo music and another piece titled the Spirit of Uluru. I hunted all afternoon sampling music to find what I was looking for.

Sometimes though, you don’t have to go hunting for music, the music finds you. That happened to me while I was watching the movie Sing with my son of all places. One of the songs is a remake of Golden Slumbers/ Carry that Weight. The lyrics struck me and felt connected to Roan’s journey at the end. Roan is carrying the weight of the world’s memories inside of him and trying to get home. I ended up listening to the song many times for inspiration to write his journey. The spark of inspiration happened quite on accident while watching a Sunday family movie.

The two final pieces of music I want to mention is by one of my favorite artists James Hood. His previous album, Pure Ceremony, was pivotal when I wrote The Fortune Teller and it was incredible timing that his next album, Mesmerica, came out right as I was getting started on The Time Collector. The entire album is gorgeous! I ended up looping the songs Tapestry and Mesmerica the most, particularly while writing the end chapters. Last December I had the chance to meet James when I went to see his concert for Mesmerica. The show is an amazing 360-degree immersive art and music show that makes you feel like you’ve stepped inside a kaleidoscope. I highly recommend going. Visit his website to see if he’ll be coming to your city. 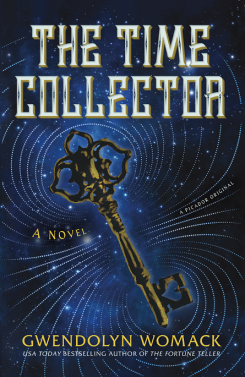 To sample all the music that helped to inspire The Time Collector, the playlist is on my website. And if you’d like to read my past posts on Undercover Soundtrack, here are my discussions for The Fortune Teller and The Memory Painter. One of the most enriching aspects of writing is to find the perfect music to go on the journey. I have infinite gratitude for all these artists who inspired me along the way. Thank you for listening!

Gwendolyn Womack is the USA Today bestselling author of The Fortune Teller and the award-winning reincarnation thriller, The Memory Painter. Her latest novel, The Time Collector, is out this month with PicadorUSA. Gwendolyn lives in Los Angeles with her family, collects kaleidoscopes, and paints as a hobby. Visit her online at gwendolynwomack.com or connect with her on social media at Twitter @Gwen_Womack , Facebook  and Instagram