Posted by Roz Morris @Roz_Morris in Undercover Soundtrack on December 10, 2014

Once a week I host a writer who uses music as part of their creative environment – perhaps to connect with a character, populate a mysterious place, or hold a moment still to explore its depths. This week my guest is UCLA tutor, Harold Ribelow Award nominee and professional psychic Rochelle Jewel Shapiro @RJShapiro

What I Wish You’d Told Me is a collection of three stories of women of all ages grappling with the whacky and the tragic in their lives. An exciting new publishing company, (Shebooks) gave me the opportunity to publish an ebook of three short works of my choice. I already had two stories that I was delighted with, but there was one in me that my bones, my guts, had needed to write for so long, and each time I started out, the ‘how’ of writing the story — its basic narrative, where to start, the climax, denouement—was like a balloon bobbing overhead with the string always out of reach, no matter how high I jumped.

I went to music as I often do for inspiration, direction. Writing lines of prose on a page or notes on a staff are hugely different, but have parallels—they begin, have a middle, and an end. There’s mood, pacing, breath stops. I played Chopin, Sousa, Wagner, nothing clicked. And then, in one of my procrastination bouts, I looked up a video of my daughter-in-law, Karen Siegel and her acapella composition Confessions from the Blogosphere, and had the eureka moment I had been hoping for.

Karen (the woman with the blue top in the video) holds an undergraduate degree from Yale, an MM (masters of music) in musical composition from NYU’s Steinhardt School where she studied with Marc Antonio Consoli, and a PhD in music composition from CUNY Graduate Center where she studied with Tania León. In this piece, she alternated and layered humorous excerpts from random blogs. Sometimes the text was set intact and homophonic—with the whole choir singing the same text at the same time, in a single rhythm — as in the opening statement, ‘I like Paris Hilton for real. Should I be ashamed?’ More often, a fragment of text was repeated in one or two voice parts at a time, offset against the same text in another voice part or voice parts, to create a rhythmic texture. This texture was frequently a backdrop for a melody in a single voice part. At other times, the rhythmic texture itself was the focal point. Altogether, it was like a cento, a poem made up of quotes, lines, phrases from others.

It occurred to me that neither Karen nor I had to have the total vision of what our creations were going to be. She used lines of dialogue gathered by different people. Bingo, I could write lines of dialogue from each of the characters I wanted in Secrets (the first and newest short story in What I Wish You’d Told Me, and see how it came together later, rather than trying to create order right away.

It made sense to me, even physically. I have a spot in my right eye that I need to see around. Sometimes it blots out the full picture of what I need to see, but somehow, my mind creates the whole of it. A study from John Hopkins University shows that when a person looks at a figure, a number, or letter, or any shape, neurons in other areas of the brain’s visual center respond to different parts of that shape, almost instantaneously interlocking them like a puzzle to create an image that sees and understands. I’m sure this is true for all of our senses. 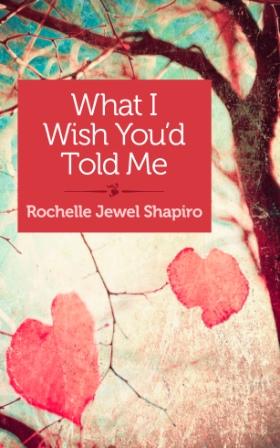 In Secrets, a story set in the 60s about a teenage girl, Leah, whose illusions about her best friend, Arianna’s family are blasted along with her faith in Kennedy’s Camelot, I began with a piece of dialogue from Arianna’s mother. ‘You ran him over!’ she says. ‘It wasn’t a dog. It was an old man.’ Arianna’s father counters with, ‘I wouldn’t have hit anything if you weren’t so drunk that I had to be the one to drive after I had a few.’

After pages of dialogue, some of which I got rid of in the end —’Kill your darlings,’ as Arthur Quiller-Couch advised in his lectures On the Art of Writing — I was able to fill in the rest, and that was the secret of my writing Secrets.

Rochelle Jewel Shapiro’s first novel, Miriam the Medium (Simon & Schuster), was nominated for the Harold U. Ribelow Award. Her novel Kaylee’s Ghost is an Indie Finalist. She’s published essays in the New York Times and Newsweek and in many anthologies. Her poetry, short stories, and essays have appeared in the Coe Review, Compass Rose, the Griffin, Inkwell Magazine, the Iowa Review, the Los Angeles Review, the MacGuffin, Memoir And, Moment, Negative Capability, Pennsylvania English, The Carolina Review, and more. She won the Brandon Memorial Literary Award from Negative Capability. Shapiro is a professional psychic who currently teaches writing at UCLA Extension. Read more about her at her website. Find her on Twitter @RJShapiro